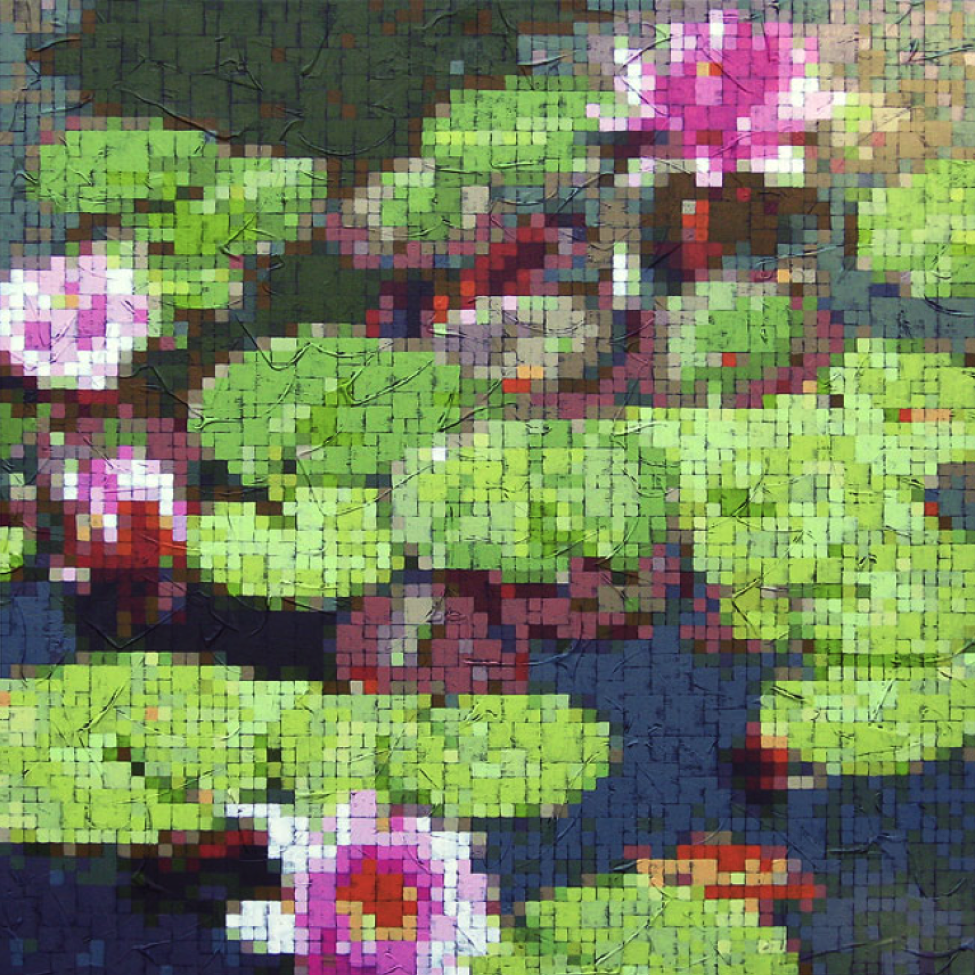 Des Moines artist Roy Cacek views square as “the most efficient of shapes. I think there would just be a lot of excess background with other shapes.”

Cacek, who was one of 10 juried artists from Central Iowa selected to participate in this year’s Des Moines Arts Festival, traces his attraction to squares to several memorable trips he took after receiving a Master of Fine Arts degree from Drake University. On those journeys, he witnessed how artists were using tile mosaics and was fascinated by their work. He brought the concept home to Iowa, but instead of tile, Cacek used paint and a grid system. “Coming out of graduate school, I was doing more figurative stuff with an overlay of two-dimensional symbols and letters, things like that,” he says. “Then,  I started doing some stuff based on the grid, which evolved into what I’m doing now.”

Cacek’s works range in size from 24 by 24 inches up to 40 by 60 inches, but Cacek believes larger canvases are more effective because they maximize what he calls the “balance between abstract and representation.” Much like a photo lens, the viewer is encouraged to zoom in and zoom out on Cacek’s work. At close range, “To Claude” (pictured) is a series of brush strokes and unrelated colors, but when the viewer steps back, those same colors blend together and emerge as water lilies.

“A lot of my stuff is based on photographs I’ve taken–people, places and things like that,” he says. “I’ve got all of my images on a hard drive. When I’m looking for new ideas, I’ll go through those images again and try to find things visually that strike me in terms of colors, or composition, or things that are personal to me.”

Once he selects an image—headlights cresting an urban street, a golden landscape or a downtown high-rise, for instance—Cacek begins painting in the unfinished basement of his Beaverdale residence. To view examples of his works,  visit roycacek.com. By Kellye Crocker When Lush touts its bath and beauty line as “fresh,” it’s ...

Written by Kellye Crocker Almost everyone thinks they can write a children’s picture book—until ...