Need to amp up your holiday spirit? Go to “Irving Berlin’s White Christmas” and you can’t help but end up in a Christmassy mood, even if you’re the most ardent Scrooge. The sparkly musical, which opened Tuesday to a nearly sold-out crowd at the Des Moines Civic Center, is merry and bright as all get out.

Based on the 1954 movie “White Christmas” starring Bing Crosby and Danny Kaye, the story follows two World War II veterans and showbiz buddies, Bob Wallace and Phil Davis, and their adventure with song-and-dance sisters Judy and Betty Haynes. The four end up at a Vermont inn the week before Christmas, suddenly tasked with staging a Broadway revue for the inn’s owner, who is Davis and Wallace’s former military commander. Turns out, that week provides plenty of time for love to blossom, get squashed, and blossom once again.

The production is filled with lavish costumes in eye-popping colors—lime green, bubblegum pink, shimmering red, deep aqua blue—and classic Berlin songs—“White Christmas,” “Blue Skies,” “I’ve Got My Love to Keep Me Warm,” among others. A major highlight is the graceful and complex choreography, ranging from the intricate and splendid tap dancing of “I Love a Piano,” to the elegant duet between Phil and Judy dancing to “The Best Things Happen While You’re Dancing.”

At the Tuesday opening, the cast delivered across-the-board standout performances, whether it was the inn’s busybody receptionist belting out “Let Me Sing and I’m Happy” or the harried stage manager throwing up his arms in a melodramatic fit.

Does the thin plot reveal some deep message that makes the show an important work of art with a capital “A”? Nah. But who cares? The musical’s old-fashioned and irrepressible holiday cheer make it winner for any season.

Color Your World Styled and Written by Sharon Hatten Orange is cheerful, reminiscent of ... 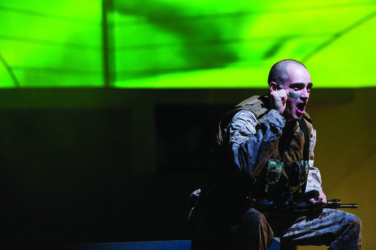 Songs for a Soldier