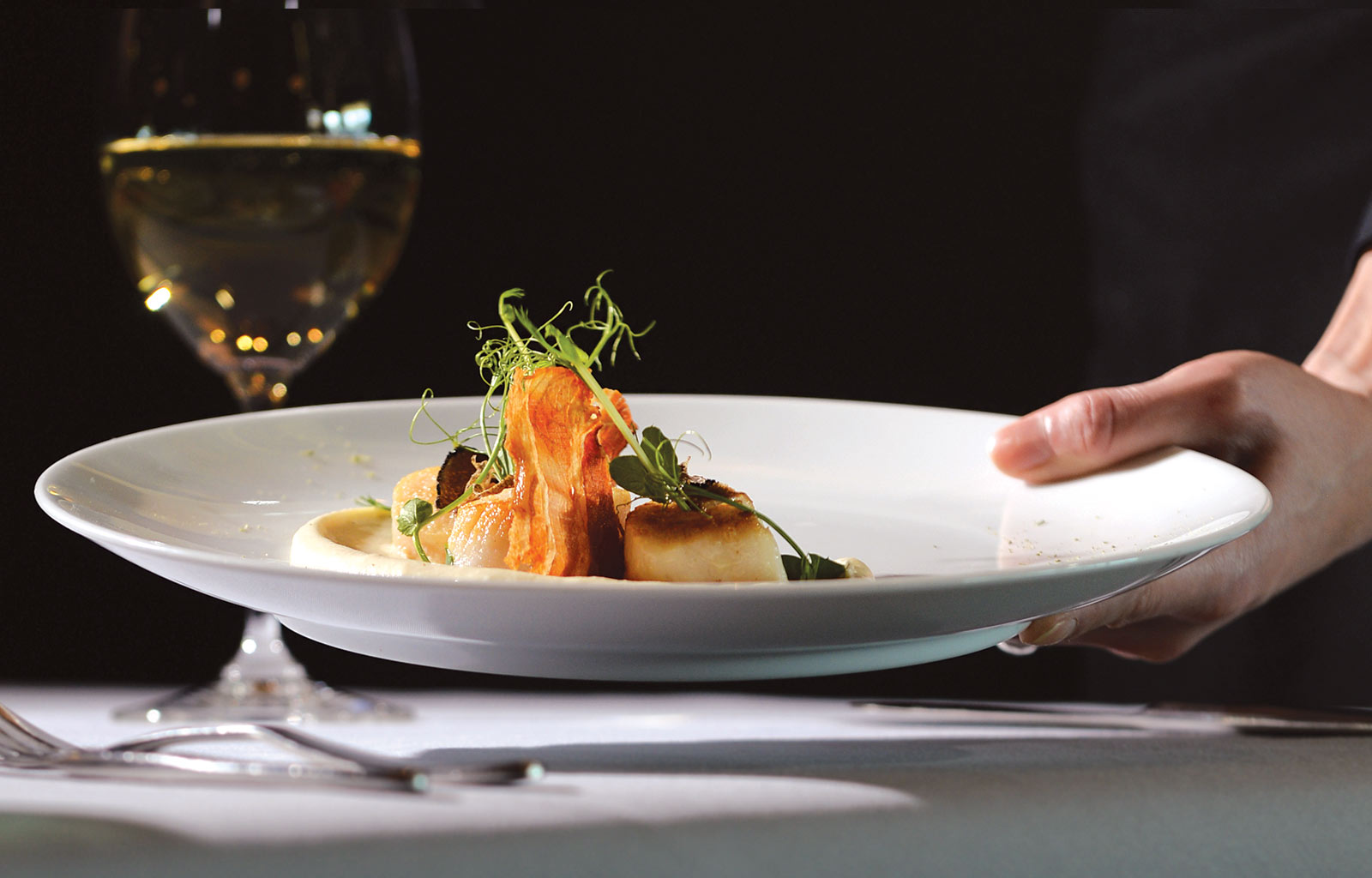 I was sitting in my hairstylist’s chair, and she was recounting a joyless evening she had experienced at a local restaurant. She and her partner were making a meal out of appetizers at the bar, and she had ordered an expensive craft cocktail. The barman, she said, had been particularly aloof, as if she weren’t quite cool enough to be there.

At one point, when she wasn’t looking, the bartender swooped in and cleared away her not-quite-finished cocktail.

“There was about $3 worth of my drink left in that glass,” she said. “It was pretty expensive, and I hadn’t planned on getting another one, so I was trying to savor it.” The couple glumly finished their appetizers, paid and left.

As a restaurant reviewer, I keep my ear to the ground, intently listening to friends and acquaintances who share dining experiences, both good and bad. Lately, I’ve been picking up a surprising number of laments about shoddy service.

In the past few years, there’s been a lot of chest-thumping in our city about how great our dining scene is. Indeed, our talented chefs and their dedicated kitchen staffs continually energize what comes to the plate. And yet, if Des Moines wants to be the first-rate dining destination it claims to be, the front of the house needs to be equally ambitious—and equally committed to the diner’s pleasure.

Second-rate service is by no means the norm in this town, but it isn’t as rare as it should be. In 2012, on the pages of this magazine, I praised “a near-meteoric rise in professionalism in service at our restaurants.” Now, however, judging from my own recent experiences and by what I’m hearing from others, not only is the quality of service not on par with the food, it’s slipping. Dramatically.

Yes, there are poised, professional servers around town, but I’m noticing that the odds of being seated in their sections aren’t always in our favor. Complicating the issue is the dearth of good servers and the high turnover of restaurant personnel. Servers have told me that, when a hot restaurant’s newness wears off, it’s in their best financial interest to move on to the next emerging star. Restaurateurs have told me that, with all the new venues opening in town, great help is harder than ever to find and retain.

Of course, the restaurateur’s problem becomes our problem, too. Fortunately, most service letdowns that I’ve experienced have more to do with lack of expertise than the kind of palpable rudeness my hairstylist reported. Many servers simply have not received the training needed to do their jobs well.

Lack of training takes many forms: A newbie brings you a cabernet sauvignon instead of the sauvignon blanc, not knowing there’s a major difference between the two. Often, you’ll find no sense of timing; a server will let you sit there wondering if you’ll ever get that first drink, then ask you if you want dessert while you’re still eating your entree. Too often, the importance of clearing plates has been all but lost; at the end of the evening, the check will be placed amid the detritus of crusted-over side plates and long-empty cocktail glasses.

“How is the pork tenderloin?” you might ask. “I don’t know. I’m a vegetarian,” your inexpert server proudly answers.

Those are just a few of many examples of missteps I’ve encountered. Each in itself seems insignificant, but when the gaffes pile up, as they too often do, they greatly diminish your enjoyment of the evening.

I know. In the scheme of all that is wrong with the world, it can feel small to complain about something so trivial as a waiter’s lack of expertise or politesse. Grumbling about service doesn’t come naturally for many of us who feel slightly uncomfortable being “served” at all. Who do we think we are, expecting to be waited on? The Granthams?

And yet, the dining-out contract is this: When you trade your hard-earned money and hard-won leisure time for an evening at a restaurant, the food should be good, and the service expert and courteous. No, it is not too much to ask.

Simple Solutions for Service That Sizzles
Head online, and you’ll see a glut of articles listing the 10 or so things servers do that annoy diners (and vice versa). Such click-bait does little to improve the overall dining culture. Yes, great service requires skilled professionals, but it begins with committed owners, partners and managers, and requires a dining public that expects, respects and rewards it. Here, then, are three not-so-modest proposals for service improvements this year:

Bring back the maitre d’
A chef-partner in a local restaurant once told me that crowd-sourcing review sites like Open Table and Yelp help identify subpar servers. Other restaurateurs have mentioned that they can ascertain which servers aren’t on their game by looking at overall tip receipts. And then there are customer comment cards, given with your check.

In this sense, diners—who’ve come to eat, drink and be merry—are doing management’s job. Whatever happened to the ever-present eagle-eyed owner, maitre d’ or floor supervisor who ensured high service standards night after night through ongoing training and watchful care? Back in the day, such professionals would step in when a glitch arose and fix it, rarely giving any reasonable diner the chance to leave disenchanted. Too often today, servers are on their own, with very little oversight or backup—and the dining experience suffers.

Give servers the training they need
Mike Holms, marketing director for Splash Seafood Bar & Grill, recently told me that when he was hired as a waiter at T.G.I. Fridays in the 1980s, the training process took two weeks, complete with classes and quizzes every day. What restaurant today requires such thorough training?

Very few indeed, I’m fairly certain. Hence, as diners, we find ourselves explaining to our novice server that the sauvignon blanc we ordered is a white wine, not the red cabernet sauvignon he brought to the table; when he arrives with our entrees, we jostle our uncleared salad plates to accommodate him. And so on. As we experience and adjust to misstep after misstep, we diners are essentially doing the job of educating the staff. Our evenings out become trial runs as new servers are left to figure out for themselves the intricacies of the profession.

Diners—keep your standards high
A restaurateur recently told me that diners have lowered their expectations considerably when it comes to service. He attributed this to, in so many words, the Applebee’s effect: We’ve become so accustomed to casual, everyday dining at high-volume, quick-turnaround, midrange places that when we sit down for a splurge, we no longer expect the polished, fine-tuned service that was once the norm. Why, then, should restaurateurs make such service a priority?

I believe that most diners still yearn for expert service, but would rather forego it than make a fuss about it. Yelpers aside, most of us prefer to forget about disappointing experiences and simply move on.

Sadly, I fear that shrewd restaurateurs will continue to gauge just how much diners will put up with, and then take our low standards to the bank. Yes, diners, I’m afraid we’ll have to speak up. Make the calls; send the emails. Or, let your dining dollar do the talking. Patronize restaurants where service remains a priority. As less-exacting restaurateurs survey their half-empty dining rooms, maybe they’ll get the message that, for many of us, service still matters.

Restaurants That Do Service Right

If you’ve forgotten how pleasant it can feel to be in the hands of an expert and caring front-of-the-house staff, do yourself a favor and dine at one of these venues that in my experience consistently deliver top-notch service. Not coincidentally, each has a savvy maitre d’ or owner on the floor each night to help keep the standards high.

Baru 66: There’s just something so reassuring about the way co-owner Sara Hill manages the room with elegance, joy and a sharp eye—you feel in good hands the minute you walk through the door. I also appreciate the esprit de corps among the servers, who work together to ensure that a good time is had by all—and not just those in their sections.

Tursi’s Latin King: That classic triumvirate of good service—the eagle-eyed maitre d’ (in most cases owner Bob Tursi), the server and the back-waiter (aka the busboy) are all in place to ensure diners are well taken care of, from the hearty greeting to the warm farewell.

Table 128: Co-owner Sarah Pritchard has mentioned to me that she hires front-of-the-house staff based on personality above all else. The practice has served her well: Servers here nail the right balance of personable and professional. On the one rare occasion when our server seemed a bit green, the newbie’s genuine desire to show us a great evening—and the way Pritchard was quick to step in and make that happen—ensured that our experience lacked for nothing. 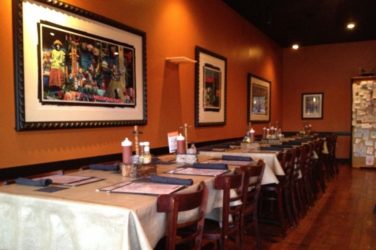 Above: With so many new restaurants around town, it’s time to revisit some well-established, ... 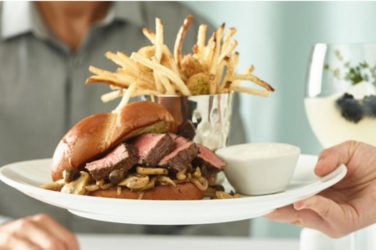 Dine High or Low, by the Water

These two spots are at opposite extremes of the dining spectrum, but both are ... 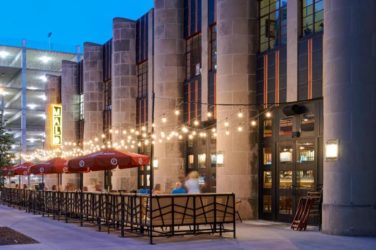 A Refresh Focused on Fresh

Above: Malo’s pleasant patio will soon have an alfresco bar. By Wini MoranvilleSteer clear ...