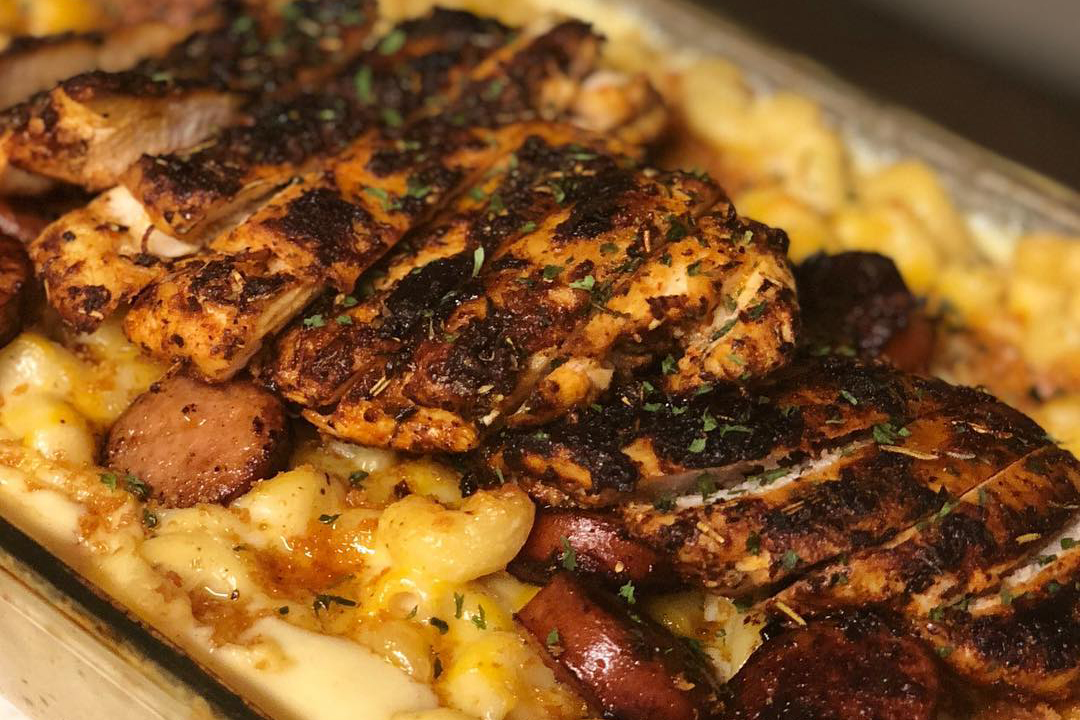 Blackened Chicken and Andouille Sausage Mac and Cheese is one of Jasmine Hayes’ favorite culinary creations.

Writer: Karla WalshEach week in dsmWeekly, we’ll introduce you to a local food company owned by a person of color. Catch up on the first few features: Street Eats DSM, G.G.’s Chicken & Waffles, Palm’s Carribean Cuisine, Artis T’s Catering and Your Mom’s Bakery.Since age 3, standing on a stool next to her great-grandma in her kitchen in Des Moines, Jasmine Hayes has loved being in the kitchen. By sixth grade, she was sneakily experimenting with flavors and recipe tests. “While Mom was out of the house, I’d take anything from the kitchen and play around,” she recalls. “I often made crispy fried shrimp and I tried to bake rolls a few times. It’s not easy, especially at age 12 and without a recipe. Sometimes it turned out, sometimes it didn’t.”Hayes spent years in the corporate world at businesses like Wells Fargo and Mercy, “but couldn’t see myself doing it forever. I needed to focus on something that I love to do. That’s cooking,” she says.So in 2015, she started from scratch and enrolled in the Iowa Culinary Institute and DMACC to earn a degree in culinary and hotel restaurant management. By the time she graduated in 2017, Hayes had sharpened her skills at everything from savory to sweet—her almond petits fours were a hit during a big baking exam—to strategies to launch a business. Hayes did just that in 2018, when Jazz It Up became an official personal chef service. The business name is a riff on her own name, Jasmine, plus “I jazz up a lot of different menu items and create art from something initially basic. I love to put my own stamp on comfort food from many different cuisines,” she says. Her specialty is private in-home dining, which has now evolved into mostly patio parties. Jazz It Up will soon offer preorder carryout meals, but for now you can learn more about upcoming options for private dinner parties (oh, yes, and scroll through dozens of tempting recipe photos) on her Facebook and Instagram pages.“I customize every menu based on a client consultation and have hosted birthday and anniversary gatherings,” Hayes says. “I come to you, set up the table decor, cook and clean up so you can just enjoy your one-of-a-kind menu.”While each menu is unique, Hayes says that her shrimp and grits are a popular request. They feature cheesy grits, jumbo seasoned shrimp, a salmon croquette, bacon, marinated rainbow cherry tomatoes and Parmesan cream sauce. Another surprise success arose for a Friendsgiving: a corn muffin filled with mac and cheese, topped with mashed potato and crispy chicken.Her inspiration comes from her great-grandma and culinary school, of course, but also from her daily dinners with her husband. “We laugh about this often, because I vow: ‘I don’t have a catering event tonight, so we’ll support someone else’s business and order out,'” Hayes says. “Then I think, ‘I could create something today!’ So I cook for us and learn what works best for catering from those trials at home.”

At the Table with Your Mom’s Bakery

By Wini Moranville So, where does someone who has written more than 750 restaurant ...

Battle of the Chefs 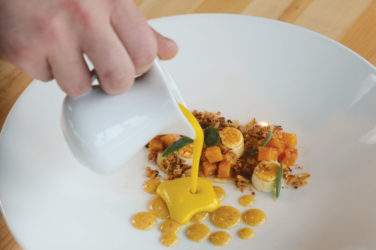 These five dishes stand out as the most memorable amid a year of many ...