Earlier this year, I was mostly happy to hear that Cyd Koehn was named Des Moines’ Best Caterer in the 2019 Business Record survey. I say “mostly” because the more accolades she gets, the harder it might be to snag her for my events – and I have had smashing successes whenever I have done so.

I can’t remember the first time she popped onto my radar, but Cyd has been catering for over 25 years. During the past couple of decades I’d notice that she was sometimes the caterer at gatherings that featured enticing food that was beautifully presented.

So, one past winter when I was looking to host a Whiskey Party, Cyd came top of mind. I told her I’d be mixing up Old-Fashioned cocktails (which I had rediscovered on a recent stay at the Brown Hotel in Louisville), and to base a menu on that. Her plan was divine. The fork supper included beef tenderloin served on a strikingly pink Himalayan salt block, with killer-good condiments (including a wasabi sauce I think of often); bourbon-Sriracha meatballs; smoked Gouda potato boats, and bright, crisp garden veggie wraps. Hazelnut-chocolate dessert cups, with whiskey cherries, provided the head-turning finale.

What I especially loved was the way Cyd waltzed in and got everything set up on her smart-looking platters just before the guests arrived. The price seemed right as well. This beautiful dinner, which friends still talk about, cost a bit over twice as much as if I’d have made everything myself. That’s more than fair: Such a feast would have taken me days to put together, and I would not have enjoyed my party nearly as much. 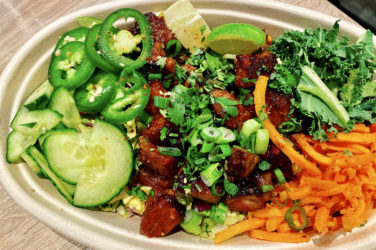 This chopped salad with pork came via one of the chef’s suggestions at Papaya ... 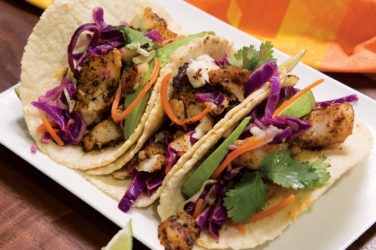 A Tico Take on Latin Cuisine 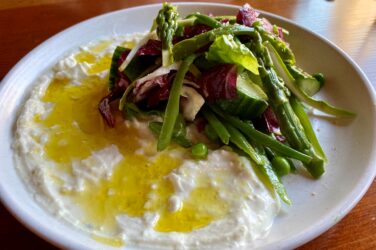 The spring vegetable salad, complete with peas, cucumber, asparagus, whipped feta and labneh, is one of ...