The excerpt below is from “Equal Before the Law: How Iowa Led Americans to Marriage Equality” by Marc Hansen and Tom Witosky, © 2015 by the University of Iowa Press. Used with permission.

Moments earlier in the courtroom nearby, oral arguments had concluded before an overflow crowd that spilled into an area providing closed-circuit TV coverage. For more than two hours, Roger Kuhle, the assistant Polk County attorney representing recorder Timothy J. Brien, had faced off again against Dennis Johnson, the attorney representing the six plaintiff couples. Did the Iowa legislature have a justification to restrict civil marriage licenses to male-female couples only? Or did the law improperly discriminate against a group historically subjected to intolerance?

Kuhle’s conclusion: marriage has always been a heterosexual institution necessary to encourage procreation and provide stability to the family unit. As a result, the plaintiffs were prohibited from making a claim of equal protection unless the court was willing to revise the centuries-old definition of marriage. “Marriage is between a man and a woman,” the county’s lawyer said at one point. “I am not being trite, your honor. But it is an oxymoron to say ‘same-sex marriage.’ ”

Johnson responded by saying his plaintiffs were not asking the court to redefine marriage but rather to recognize this: the right of two homosexuals to marry was no different from that of two heterosexuals. “We are not suggesting a new institution,” said the local counsel. “We are suggest- ing that everybody be able to participate equally in the institution that has existed since the beginning of this state.”

He completed the plaintiffs’ argument by repeating the story about Jen and Dawn BarbouRoske’s search for a preschool. The process was going smoothly until the two moms learned that daughter McKinley would not be permitted to participate in a family-week project like the kids with opposite-sex parents. “They were just about ready to put their money down because they thought they had found a perfect place,” Johnson told the court. “But they thought to ask if there was any way their daughter would be treated differently because she had two moms.” He then explained the significance. “McKinley was going to be shamed in front of her peers because the government says her family isn’t as good as other families.”

McKinley and her two moms, sitting off to the side in the front row, had been paying close attention. More than that, McKinley, the ten-year-old Star Wars fan, was deliberately staring a hole through Marsha Ternus, trying to reach into the chief justice’s unconscious with a Jedi mind trick and influence her decision. “I just really felt confident and comforted by her,” the child would say later. “In my house, girls rule. I just felt I had a connection. I was a little girl fighting for my parents, and I felt she would realize it. At school, the female teachers can always get the crazy little boys to behave. I thought if I got her on my side, I could start moving something with the Force, and she’d tell the rest of them what to do. I was concentrating so hard.”

Audio and video devices are prohibited for most Iowa courtroom visitors, but the rules say nothing about shutting down telekinetic powers. For the record, McKinley’s moms were almost certain they noticed Ternus returning their child’s stare. Alas, that was unlikely. Not wanting to be subconsciously swayed by anything but the facts and the law, Ternus makes a point of keeping her eyes away from the gallery.

While McKinley was attempting to channel the chief justice, her lawyer was sneaking peeks at the clock. Johnson had been talking and taking questions for almost forty minutes, and he still hadn’t mentioned the kids and their right to have married parents. Ternus must have noticed Johnson’s anxiety because she told him not to worry about the time. “Okay,” he thought, “but it has to end sometime, and I have to get this in.”

Then it happened. On the last question, Justice Mark Cady provided an opening: “If we believe that the plaintiffs are entitled to the same rights and benefits of marriage but not the title, can we consider some kind of civil union remedy?”

Johnson’s response was direct. “If my clients are given civil unions, they will be given the badge of basically second-class citizenship,” he said. He talked about how the children of gay people deserve to have two parents like everyone else and should not have to settle for some lesser legal agreement. He used McKinley’s experience at the kitchen table and her parents’ experience at the preschool as illustrations.

Finally, he pointed to the U.S. Supreme Court’s rejection of “separate but equal” in Brown v. Board of Education. Quoting from the ruling, Johnson pointed out what the court had said. Even if the schools were equal then, the children “would know they were being sent to a separate school because they were deemed to be inferior.” They would be hurt in their hearts and minds in a way from which they might never recover.

“These are real harms to people,” Johnson told the court, reminiscent of Rufus L. B. Clarke’s 1857 prediction that Iowans would one day embrace racial equality. “This lack of respect, dignity, and equality—the state of Iowa should have no part in that. The state should provide full marriage equality under the same name as everyone else.”

“There,” he said to himself after making his point. “I got it in.” Then came a mini panic attack. “Oh, shit. I just ended the argument.” Johnson had more to say, but when he looked at the justices, the justices looked back at him. Silence. Three words popped into his head: “This is over.” A pause. Then one final thought about the members of the court. “I got them. I got them all.”

During his thirty years in the courtroom, Johnson had never experienced a moment like that. Though something had happened, he wasn’t sure what. Seldom had he been so touched by the emotion of a case. Two memories had stuck in his mind on the morning of oral arguments, and he carried both into the courtroom.

The day they filed the lawsuit, the plaintiffs and their lawyers had held a news conference. Before the plaintiffs met the media, they took part in a session on how to conduct themselves with reporters. While they sat quietly waiting for “class” to begin, someone in this group of strangers broke the silence with a question. “How did you first know?”

Some of the responses elicited knowing smiles. Reva Evans laughed and said she should have known she was gay in high school when she wanted to wear her father’s ties. Some were poignant. Jason Morgan said he knew as far back as he could remember. Still others were sad. “Old Fart Number 1,” Larry Hoch, trapped in a traditional marriage, spent much of his adulthood in painful denial. Johnson sat in amazement as they told their stories. He had no idea; why would he? He’d never given it much thought. But now he got it. “Imagine going through life hiding your sexual orientation,” he thought, “listening to people talk about your immorality in the eyes of God. They live with that all the time.”

To Johnson, the notion of people changing their sexual orientation seemed more preposterous than ever. On the morning of oral arguments, he watched each of the plaintiffs, one by one, leave the hotel and board the van to the courthouse. “My only thought,” he recounted, “was ‘Oh, my God. I have to win this for them.’ ”

Scanning the court’s bench one last time, he mused to himself, “I don’t know how any one of you can rule against my clients. I don’t see how any of you can.” 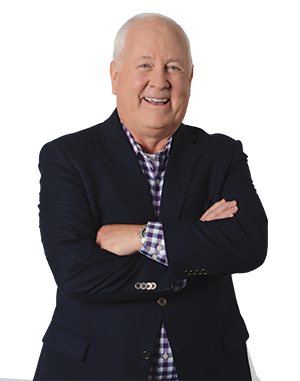 An irrepressible storyteller, Terry Rich is a masterful promoter who thrives on turning ideas ...

Written by Jody Gifford Photos by Duane Tinkey When you think of the metro ...