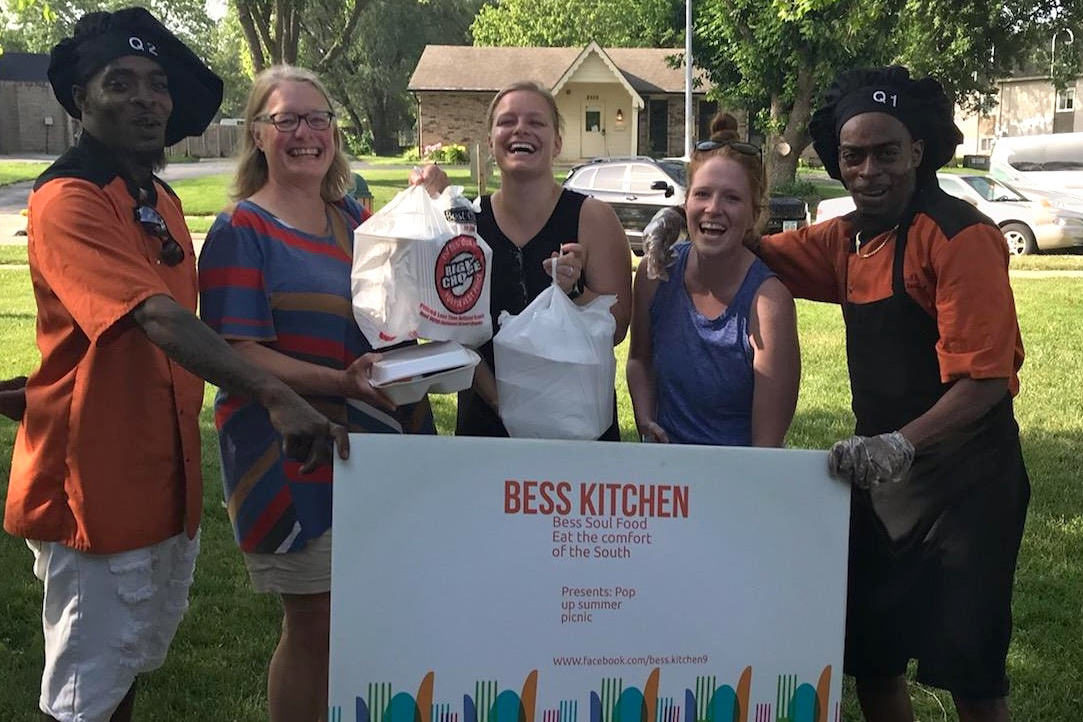 Quinn, far left, and Quincy, far right, are two of the minds behind Bess Kitchen, a Southern-comforts food business.

Writer: Karla WalshEach week in dsmWeekly, we’ll introduce you to a local food company owned by a person of color. Catch up on the previous editions: Street Eats DSM, G.G.’s Chicken & Waffles, Palm’s Caribbean Cuisine, Artis T’s Catering, Your Mom’s Bakery, Jazz It Up and Chellie’s Sugar Shack Bakery.In October 2019, twins Quincy and Quinn Bess hopped on a Megabus in Atlanta. They landed in Des Moines, which had been home to one of their cousins for the past five years, seeking a fresh start. While they brought almost nothing with them—literally the clothes and shoes they were wearing and nothing else—they did pack their grit, determination and well-honed soul food cooking chops.“We grew up in Elma, Georgia, a small country town,” Quincy recalls. “There wasn’t much to do but play sports and cook. My auntie used to make sausages, tomatoes and rice, and we’d often share oxtail, fried chicken, low-country boil, collard and mustard greens.” Quinn and Quincy, who were separated at birth and raised in separate homes until they reunited at 13, moved to Atlanta together and worked in everything from fast food to fine-dining restaurants. Once they arrived in Des Moines in October, they took part-time work in chain restaurant kitchens until the pandemic put things on pause. The time off (and lack of a consistent paycheck) lit a fire under Quincy to make his lifelong dream a reality. While Quinn is settling down and preparing to welcome his first child, Quincy took off building the food brand they hoped to someday own together. For now, Quincy and his girlfriend, Ashley Hill, have launched Bess Kitchen and applied for a commercial kitchen license.Soon, Bess Kitchen will sell out of Kitchen Spaces (1139 24th St.), but for now, you can score some of their smothered pork chops, seafood-loaded low country boil, fan-favorite collard greens and more during their weekend pickups that you can learn more about on their Facebook page. Quincy makes monthly trips to Georgia to acquire classic ingredients to ensure that his “soul food from the soul” is up to his standards. Someday, Quincy dreams of owning a food truck and brick and mortar restaurant—half for Quinn, half for Quincy to allow them to both show off their unique specialties on different menus under the same roof.“We truly had nothing but a dream when we arrived here,” Quincy says. “Des Moines is giving me a chance to show them who I am now—my personality, character, love and intelligence. Based on the positive response so far, it’s clear the community is showing up, so I want to give them all I’ve got.”

Try Out C.J.’s Choice at the Cheese Shop

News we’re excited to share: Des Moines Performing Arts has announced a new series for the ...