Volunteer work and family togetherness don’t necessarily go hand in hand. There are board meetings, often at night, and visiting facilities or attending events tied the charitable organization. How might any of that involve your 10-year-old?

But with a little effort, a way can be found to combine family life with volunteer life. Tony Dickinson discovered that at the Boys and Girls Clubs of Central Iowa, where he currently serves on the board as a vice president. He and his wife, Kim, have two boys and a girl and just as often as not, the entire family can be found after school there, involved in something tied to one of its activities.

“When school’s out, club’s in,” Dickinson said. The clubs put on a talent show every year, and Dickinson said Kim and the kids are keen to take part in it and interact with children from different parts of town. This is a family effort, and Dickinson said he had to make sure Kim was on board with it. She agreed.

“My wife loves Boys and Girls Clubs. She’s up there first,” he said.

And there’s always Little League. Tony spends some 400 hours a year coaching the two boys in sports. Their 3-year-old daughter is not quite up to swinging a bat yet. But give her time.

Defining, and Aspiring to Attain, the Threshold of Wealth

BY STEVE DINNEN Where does wealthy start? Try $2.3 million, according to those quizzed ...

BY KATY BARNATO, CNBC Rising numbers of female millionaires and billionaires around the world ... 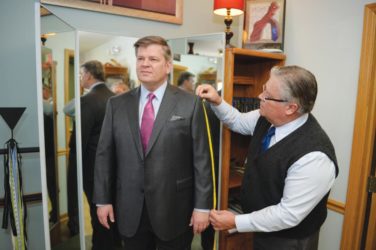 Speaking of Bespoke: A Word on Custom Fashions

Above: Clothier Tony Woods takes one of dozens of measurements needed to craft a ...