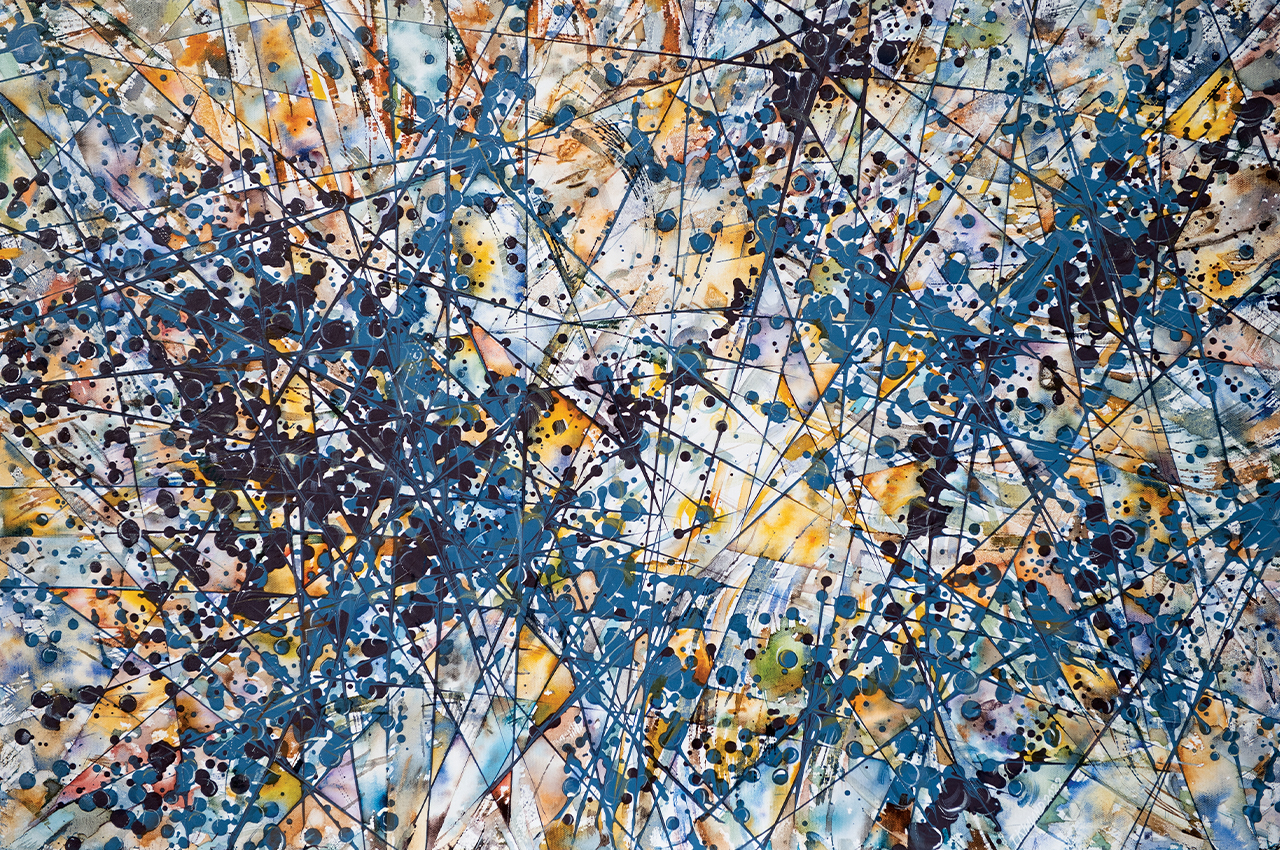 Igor Khalandovskiy painted “Grapes of Wrath” (watercolor, acrylic and oil) as an abstract representation of the war in Ukraine. The title also refers to the 1939 John Steinbeck novel focusing on people forced to leave their home because of economic hardship. “It’s a universal situation,” Khalandovskiy says. “I study everything.”

Khalandovskiy begs a visitor not to shoo away a wasp flying into the house. He steps aside to demonstrate how the wasp won’t fly indoors and will instead settle back into its nest, which balances delicately atop the front door.

“It’s nature,” he says. “They are not bothering. I open the door and never have a bite. … Next year they will fly away, and leave a beautiful masterpiece made [by the] insect.”

Khalandovskiy, 56, is originally from Kharkiv, the second-largest city in Ukraine (located in the northeast part of the country), and now lives in West Des Moines with his wife, Nataliya. He is a prolific artist and teacher who finds inspiration everywhere—including that wasp nest in his parents’ doorway, which he’ll use to inspire future work. Khalandovskiy’s mixed media works range from the symbolic and surreal to depictions of the natural world. Some are “fantastical landscapes filled with internal collision,” as he writes on his website.

Khalandovskiy’s parents’ home is one of the several places where he creates, and the volume of his artwork speaks to the support of his now-retired parents, who enrolled him in art school at a young age. “They give me everything,” he says.

In their home, his paintings are in the bedrooms, the living room and in the garage. In the office, there are also pencils, brushes and paints, alongside a desktop computer and a small, sensible couch. The diverse works include images of his home city, visualizations of Mars and more. 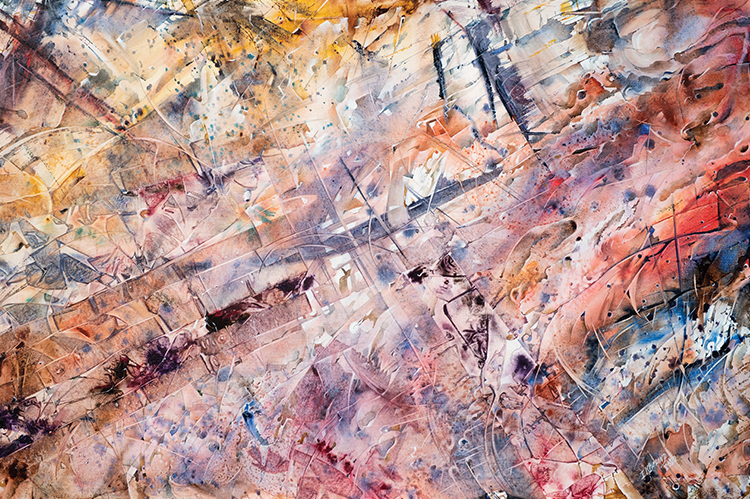 Khalandovskiy painted “Sky and Rock” (watercolor and acrylic) to represent the war as he visualized “the rising of smoke and buildings falling from the sky.”

But it’s his hometown that’s drawing most of his focus these days. As of press time, Russia was intensifying its assault on Kharkiv, pounding the city of 1.4 million people with rockets. The war haunts Khalandovskiy: “When my friends tell me they escape from bombardment, I close my eyes and imagine. You see how life is ruined. You don’t know what to do. When you see the danger, you worry about kids, parents about to be killed, hear the sound of the sirens. You think of the meaning of life.”

The Russian invasion keeps him awake at night, as he waits to read the news. He and Nataliya send money home for friends and family who don’t have jobs and need to escape; some have made it to Poland and western parts of Ukraine.

When the war started, he painted “Sky and Rock,” which is now by his parents’ kitchen table; it’s a creation of yellows, reds and browns that depict a chaotic representation of war. He made it after a friend had called to say a rocket had hit his native city. “I visualized the rising of smoke and buildings falling from the sky,” Khalandovskiy says.

A painting he made partly with a knife, called “Grapes of Wrath,” is another representation of the conflict, with round shapes juxtaposed against sharp lines.

The name itself is powerful, he explains, because it also is a reference to the 1939 John Steinbeck novel that tells the story of how American farmers, facing economic hardship, were leaving their homes during the Great Depression. “It’s a universal situation,” he says. “I study everything.”

Indeed, Khalandovskiy, Nataliya and his parents left Ukraine in 1994 because of the economic collapse in the wake of the former Soviet Union’s fall. Khalandovskiy went to work for Camp Dodge in Johnston, doing graphic design and digital animation. 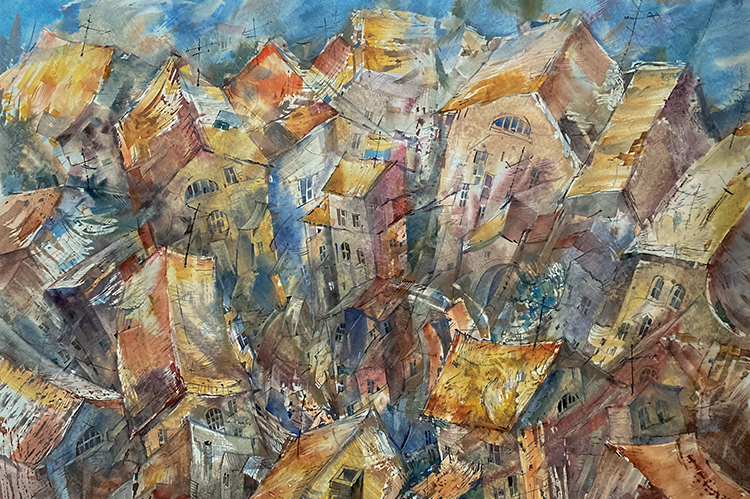 “Roofs” (watercolor) depicts his hometown of Kharkiv, a city of 1.4 million people that has been under intense assault. Khalandovskiy says it reflects his memories of the old part of the city when he was a student.

Neely says he jokes with customers that when Khalandovskiy is teaching, “they will not end up with the picture they chose. The standard sunset with a tree—he’ll throw in a bird or dragon or pirate ship or something that is not in that image. … Igor is going to take you somewhere you didn’t expect to go.”

For his next piece, Khalandovskiy says he wants to keep experimenting with combining oil and watercolor. “To find a new technical approach on a new level is a universal process for any creative person,” he says.

“I have unlimited imagination,” he adds. “During the day, I create something in my head. I go home, I draw. … It’s a reflection of what’s inside my mind. It’s boiling, boiling.”

Diane Mussell of Johnston has taken classes from Khalandovskiy at the Art Center and says he takes the viewer on a journey with his paintings. “They are complex, and hold a sci-fi dreaminess,” she says. “I love the oldworld paintings of his homeland.”

Khalandovskiy has this advice for adults starting art in midlife: Just pick up the brush and practice. “A few months ago, I had a student at the Art Center, she just didn’t realize she had a great talent,” he says. “I told her, ‘Do exactly what you’re producing, just a little different.’ … I just recommended to her to paint every day.” 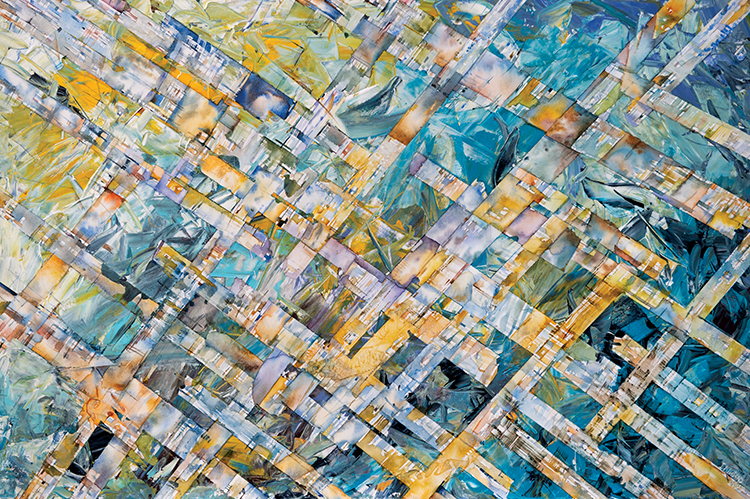 With a title inspired by the war, “Tired Sky” (watercolor and acrylic) reflects Khalandovskiy’s thinking about his country as well as humankind. Specifically, he says, it’s meant to represent the idea that when you look at the sky, you get a sense of how the world is “repeating the same problems.” He painted the work this past spring.

Igor Khalandovskiy offers advice for adults who want to get creative.

Identify your talent. Many people don’t realize what their talent is, Khalandovskiy says. Take time to understand where you truly shine.

Practice. “You have to be consistent; you have to practice.”

Set goals. “You have to move from one goal to another. You have to put yourself in uncomfortable situations, to study something new. Little by little you move forward.”

Understand the value of failure. “Let’s be frustrated. Why not? Maybe you need to relax and switch to something else. Then you need to analyze what happened.”

Focus on balance. “You don’t need to exhaust yourself. You need to enjoy your life.” 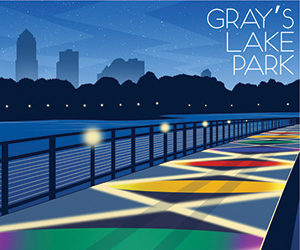 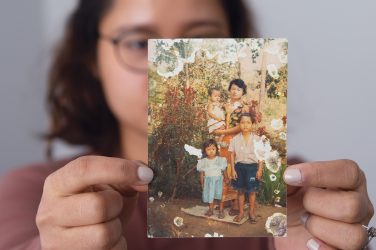 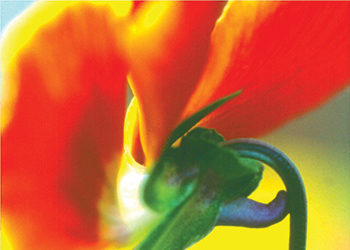