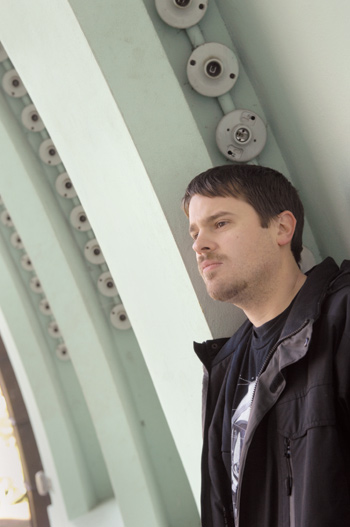 Keith Lynch hasn’t always been a loner; it’s just where he hit his stride.

“I was in a band for about five years,” Lynch says. “When that ran its course, I started doing some things on my own, and I found that I really enjoyed that freedom. Now it’s all I do.”

Performing under the name Unknown Component, the 31-year-old Lynch stars as a modern-day one-man band, where every aspect of his musical process is self-contained: He handles all the songwriting and performs every instrument that appears on his CDs. He
then mixes, produces and distributes the
albums himself. Though there are plenty of DIY musicians in any local music scene, few of them truly handle every aspect of music making on their own.

Born and raised in small Iowa towns like West Branch and Tipton, Lynch studied philosophy at the University of Iowa before finding a home among the musicians and artists in the Ames area. Today, Lynch works at his music full time, making his living off album sales and live shows. It’s a lifestyle that’s possible because of his talent level, to be sure. But all the talent in the world would be useless without the drive to put it to good use.

Drive is something that Lynch possesses in spades. It’s why he can call music his full-time job, and it’s given him a well-earned reputation as a true professional and tireless worker.

“There’s nobody around who works as hard as he does,” says Becky Migas, former events co-chair for the Greater Des Moines Music Coalition (DMMC). Migas and the DMMC booked Lynch to open the 2012 edition of their spring music festival, Gross Domestic Product (GDP). “When we looked at bands for GDP, we wanted acts that were really putting in the work to promote themselves and get their music heard. (Lynch) was an obvious choice,” she says.

Lynch has indeed put in the work. His recently released CD, “Blood v. Electricity,” has received glowing reviews from local scribes in Des Moines and Ames, as well as being featured in The Huffington Post and Ireland’s Music Review Unsigned.

Lynch’s sound—often referred to as “dream pop”—is highly reminiscent of acts like Mazzy Star. His vocals are subdued and understated, and his instrumentals are rarely overpowering. It’s the kind of music that would probably be very popular in Colorado and Washington state, thanks to some new legislation in those places.

But playing all the instruments himself and mixing everything in his home studio also creates a unique problem for Lynch: He’s an unusual act to watch live. Because he records all his backing tracks at home and eschews the looping stations and pedals that allow some musicians to live-loop tracks on the spot for a show, Lynch takes to the stage with his guitar and his laptop computer. The laptop then plays all his backing tracks, while Lynch stands downstage and sings.

“Sometimes when people see me, it might seem a little weird,” he says. “But for the most part, the reception has been really positive. People are interested to see what I’m doing, because it’s not something that they encounter all the time.”

And if anything is true about Lynch, it’s that he’s a big believer in breaking new ground and providing people with fresh experiences. That’s something that’s reflected in everything from the way he plays his music to the name under which he plies his trade.

“There’s always an unknown component to life,” he says. “You can read about things and explore life, but it’s impossible to know about everything. I just wanted to try and convey that with the name, you know? The notion that there’s always something that will remain unknown.”

Written by Wicker Van Orsdel Who pushed the fast-forward button on 2012? With the ...

Larry and Cynthia Eisenhauer wrote more than 700 letters to each other the first ...