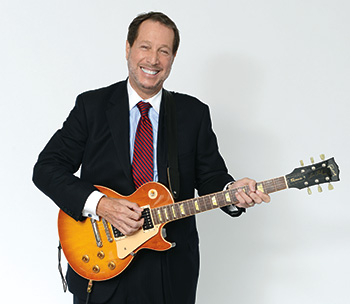 Kind of Blue
Though Maxwell says he inherited a love of music from his parents, he claims he’s a “mediocre” blues guitarist. “I’m too impatient and lack the discipline to practice much. I’d rather play than practice.” His inspirations include Muddy Waters, B.B. King, Eric Clapton, Stevie Ray Vaughan and Robben Ford.

The Maine Event
The Maxwells own a log home on a three-quarter-acre private island in a Maine lake, where they spend time every summer. Madeleine, his wife, is a native of the state.

Anton Chekhov
Maxwell’s favorite Russian author. “I have tremendous respect for the way he uses narrative and language. … I also consider him as one of my mentors; among other things, I learned a lot from him about how title and status can get in the way of normal human relationships.”

Brushes With Fame
The Maxwells have entertained thousands of government officials, artists, business leaders and celebrities over the past 14 years. Jane Goodall, Garrison Keillor and Salman Rushdie are among the most memorable guests.

66
Age Maxwell was when he climbed—and summited—his first mountain. In May 2011, he traveled with members of the Drake football team to Tanzania, where they worked on service projects, including building a wing on an orphanage. He then climbed the 19,340-foot Mount Kilimanjaro with his two sons and men from the team. “I was in the best shape of my life.”

Aha Moment
At Grinnell College, Maxwell majored in Russian studies with the goal of becoming a diplomat and “saving the world from a nuclear standoff.” With the U.S. involvement in Vietnam growing, though, he became disillusioned with that idea and increasingly found himself “rushing through my homework so I could read. …Dick Sheldon (his academic adviser and mentor) told me, ‘If you go to graduate school, you can keep reading.’ That was a life-changing moment. I realized I could have a career reading books I love, writing about them and discussing them in class with smart young people.” Maxwell received his master’s and doctorate degrees in Slavic languages and literatures from Brown University and then taught Russian language and literature at Tufts University until 1989.

Jazzed
Maxwell’s father, Jimmy Maxwell, was considered one of the nation’s most prominent lead jazz trumpet players from the 1940s until his death in 2002. He performed with such notables as Benny Goodman, Count Basie and Jimmy Dorsey and was a studio musician with NBC in New York, playing for “The Tonight Show Starring Johnny Carson” for 10 years and for other top shows.

30+
Number of times Maxwell has traveled to Russia, starting as a band boy in 1962 with the Benny Goodman Orchestra as part of a cultural exchange tour. The trip sparked a lifelong interest in the country: “It’s a fascinating puzzle, encompassing 11 time zones and comprising dozens and dozens of nationalities and cultures that no one’s ever been able to govern successfully.” Over the decades, Maxwell has studied, taught and consulted at a number of Russian institutes and universities.

40+
Number of seven-figure donations made so far to distinctlyDrake, the $200 million campaign that was launched in 2008. “People have faith in our vision.”

“We”
Maxwell’s favorite pronoun and one that reflects his educational philosophy. “The days of the sage on the stage are over. Our faculty members understand and value the fact that student learning is a collaborative and interactive process.” To wit: Drake’s emphasis on service learning projects and experiential educational programs, designed to engage students in the local as well as the global community.

Family
Wife, Madeleine Maxwell; sons Justin, 37, who works for Google in Silicon Valley, and Steve, 35, a physicist at a national laboratory; goldendoodles Gus and Moose; and rescue cat George.

Bookshelf What We’re Reading And the Mountains Echoed by Khaled Hosseini (Riverhead, 2013). Follows ...

Whether your style is vintage, classic or contemporary, reading and writing are always in ...