It started as a sketch on a napkin. Des Moines photographers Jami Graves and Joe Crimmings had a vision to take Des Moines landmarks and bring them to life through a dancer. Each photograph would tell a visual story, contrasting the elegant, smooth lines of the dancer’s body with the geometric shapes of some of the city’s most iconic pieces of art.

“Could we change the perspective of someone who might say, ‘Ballet tights? Not for me,’ to instead to see this as an art form just like the Travelers Umbrella? That was the challenge for us,” Graves says.

So she approached Carolyn Jenison, executive director of Ballet Des Moines, and asked if she and Crimmings could shoot the ballet company’s seven resident dancers. It was an easy sell; Jenison believed the photos could serve to make ballet less obscure to the average person.

“The community has already embraced the beautiful pieces of art around town,” Jenison says. “This was a way to use storytelling to integrate the dancers into the community in an artistic way and help the public recognize them more personally.”

Graves and Crimmings, who together do projects under the company name INEZ, attended a rehearsal to see the dancers in action. That provided the inspiration for choosing the pieces of art or landmarks each dancer would represent: Carolina Machado Alves as “Thinker on a Rock,” Barry Flanagan’s sculpture at the John and Mary Pappajohn Sculpture

Park; CarrieRuth Trumbo as the Heritage Park Carousel in Union Park; Kiyota Nomura as Yoshitomo Nara’s “White Ghost” at the sculpture park; Jose Gamero as “Quantum Leaf,” a sculpture by Sally Pettus on the Principal Riverwalk; Sergio Alvarez as Joel Shapiro’s untitled sculpture on the Riverwalk; Serena Chu as the Travelers Umbrella downtown; and Amand Pulaj as Carl Milles’ “Man and Pegasus” at the Des Moines Art Center.

But these are hardly static dancer-beside-a-landmark photos. The goal was for each dancer to represent his or her respective landmark through movement. Some representations are more literal and others more abstract. For example, the photographers wanted Machado to “leap” through the woods as if the rabbit had been freed from the rock. At the carousel, Trumbo’s legs were meant to represent the curved legs of the horses.

On the morning of the first shoot in May, the air held a cool, crisp excitement. It’s not every day a beautiful woman strolls into Water Works Park clad in only a black leotard with a tutu slung over her shoulder. “I remember feeling so excited and at the same time thinking, ‘Don’t screw this up,’ ” Graves says.

The duo snapped photo after photo, and one by one, the dancers executed the vision and played their intended role perfectly. Crimmings’ shots focused on the big picture, while Graves captured the details. “They all truly became our favorite shoots,” Graves says.

One of the more interesting shoots was at the carousel. “When we saw Carrie originally, I wouldn’t have paired her with the fanciful horses around that carousel, but the way she melted into that structure was a perfect juxtaposition,” Graves says.

The challenge for the photographers was capturing the beauty of the dancers while also ensuring that the ballet positions were technically correct. “When we first started the project, I think our initial impulse was to ‘hide’ the photos from the Ballet Des Moines folks so we could really wow them at the end,” Crimmings says. “But after showing a few for an initial reaction, the reception was, ‘Beautiful photo but the foot is off here and I can’t use it.’ That’s when we realized the whole project could be a flop if they weren’t able to use any of the photos.”

Adds Graves: “As photographers, it’s easy to fall in love with the lighting or composition of an image, but in the critical eyes of a ballet director, a foot could be 2 degrees to the right and considered off.”

There are so many technicalities to ballet that a second dancer was at most of the sites to watch the execution. “They were able to speak a language that we didn’t know,” Crimmings says.

Jenison plans to use the photos as part of a campaign to increase awareness of Ballet Des Moines and make ballet more accessible to new audiences. “Pairing the dancers with these iconic things molds them into our community,” she says. “You get to know them by saying, ‘That’s the dancer with the Travelers Umbrella,’ which is an association you wouldn’t have drawn before.”

Ballet, she adds, is “so much more fun to watch when you know the person on stage.”

“Before we started the project, I was unaware that Des Moines had a professional dance troupe,” Crimmings says. “We have this amazing group of performers from all over the world. Here’s a way to highlight them and show just another reason why Des Moines is a world-class city.”

Guests are encouraged to wear black, white or silver, and masks are required. The event will include ballet performances; food, including a raw seafood bar; and a champagne breakfast at midnight—modeled on Capote’s “midnight menu.”

The party begins at 9 p.m. Tickets are $125 per person or $75 for young professionals and are available through balletdesmoines.org.

Click here to read the full issue of the Jan/Feb 2014 issue of dsm. 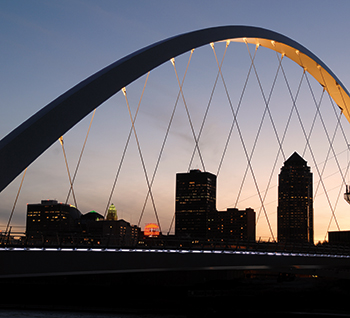 Des Moines has been transformed over the past decade, making it easier for relocation ... 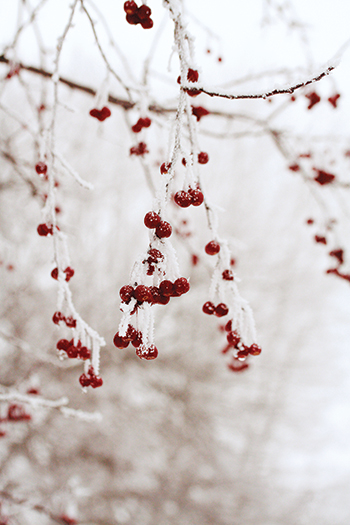