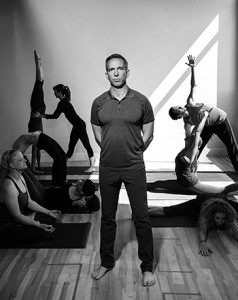 James Miller thinks something got lost in translation when yoga went from an Eastern meditative movement practice to a Western exercise class.

The 43-year-old former Marine and personal trainer-turned-yogi is known for his yoga teacher-training workshops and for founding an Iowa yoga festival that attracts some of the nation’s top yoga instructors.

In 2012, Miller left Iowa City to move to Des Moines with his teaching colleague, Ann Merren Landgren (at press time, the two were planning to marry Aug. 23). Although he’ll be a presenter at this year’s Iowa Yoga Festival Oct. 10-12 at the Embassy Suites downtown, Miller sold the festival and has shifted into a new phase of his journey as a yogi.

Specifically, Miller has created his own trademarked yoga style—Adamantine yoga—that he will be taking nationwide this fall. Miller believes that Adamantine, a word that suggests the hardness or luster of a diamond, fixes what is broken in modern yoga.

Doesn’t seem broken. According to a study commissioned by Yoga Journal magazine, 20.4 million Americans practiced yoga in 2012, up 29 percent from a 2008 survey. Practitioners spent $10.3 billion a year on yoga classes, clothing, vacations and media in 2012, almost double what they spent in 2008. Storefront yoga studios are popping up everywhere, and the number of people training to become yoga teachers is growing exponentially.

In fact, Miller was training teachers when he began making some uncomfortable observations. “I was teaching these people and I was starting to realize, ‘I don’t even think this works anymore, at least not as well as it could.’

“Our yoga in modern times has gotten too complex,” Miller explains. “It needs to be simplified in order to be more effective, and it needs to be individualized. When we imported yoga from the East, we fit it into a paradigm that we understood, which was group exercise classes.

“In the East, yoga was never taught this way. Yoga was taught individually, and it’s impossible to utilize the true power of yoga in a group setting. Modern yoga is being taught for the purpose of entertaining people rather than actually effectively progressing them. Teachers will use many different asanas (poses) to make sure that students don’t get bored, but what a student really needs are the same asanas repeated.”

So Miller created one sequence of 20 poses that is the core of Adamantine yoga. “In 20 postures, I was able to map human movement to a theoretical limit,” he says. “You don’t need to be more flexible than putting your leg behind your head. You don’t need to be stronger than doing a handstand.” The 20 poses are scalable so that each pose has beginner and advanced levels.

Adamantine yoga embraces universal spiritual principles of integrity, nonviolence, surrender and gratitude, but Miller removed what he calls some of the cheesier spiritual practices sometimes associated with yoga. “We don’t use incense,” he says. “We don’t anoint people with oil.”

Miller began testing his new style about a year ago, teaching from his studio/home in Gateway Lofts downtown. His studio grew from five to 50 students in less than a year.

Sheree Clark, a Des Moines health coach and raw foods nutritionist, starts each day with a guided self-practice session at Miller’s studio. “I would call it transformative,” she says. “It’s not just about being acrobatic. … It becomes a reflection of where you are in your own personal growth. It becomes a meditation.”

Reading to the Blind

A sharp focus on an enduring mission keeps this longtime venue firmly at the ...