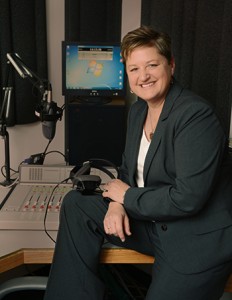 As a senior director and producer for KCCI television’s evening news programs for more than two decades, Maryfrances Evans had what she describes as a “front-row seat to all the big moments” in Iowa history, from the floods of ’93 to the presidential caucuses.

Now, as executive director of Iowa Reading Information Service for the Blind and Print Handicapped Inc. (IRIS), Evans leads a dedicated corps of more than 500 volunteers statewide in providing audio programming 24 hours a day, seven days a week for Iowans with visual impairments. This year, the nonprofit information service will celebrate its 25th year on the air.

“We’re their beloved newspaper, whichever one that may be,” says Evans, 51, who describes the program as simply “neighbors reading to neighbors.”

“But surprisingly and emotionally, we are a visitor,” she says. “Many people tell me we’re the only ‘visitor’ they got all week. It’s not a computer reading to them—we’re human.”

Evans, who has directed IRIS since 2010, and her volunteers often take that human touch a step further by hosting social events at their office in the basement of Park Fair Mall, where the volunteers who read from two small broadcast booths get a chance to chat with their listeners. IRIS also has
teams of volunteers reading in five other Iowa cities.

“Getting to meet the folks we read to—that’s the very best part,” says Evans, who occasionally jumps in to read if a regular can’t make it in. She’s also been known to put her 9- and 10-year-old daughters on the air to read—or sing. “Every single one of our listeners has a story,” she says. “For
the most part, they lost their vision later in life, so they’ve had all kinds of different lives.”

Evans, who works with just one other staff member, keeps the nonprofit afloat on a shoestring budget of $129,000 a year. She’s always striving to get more program underwriters and sponsors. “Mary has done a lot to seek new money for the organization by reaching out to nonprofit foundations around the state we had never reached out to before,” says Mary Ann Nielsen, chair of IRIS’ board of directors. “She really has brought a new awareness of what IRIS is and what it does. I can’t say we’re the best-kept secret anymore.”

Evans is currently leading a charge to upgrade IRIS’ aging computers and replace cobbled-together broadcast software in a project that will cost about $46,000. The service recently went on the air from Dubuque for the first time, and the Burlington-Muscatine area is the next planned expansion site.

One of the IRIS’ biggest needs—and Evans’ biggest tasks—is to secure a place for an IRIS audio signal on the cable television channels, to supplement a signal that’s gradually getting squeezed out by more and more powerful digital radio signals. Being on cable statewide would put its services as nearby as the familiar TV remote that most visually impaired Iowans already own and know how to operate.

If there was any question in Evans’ mind about how much IRIS means to its listeners, she only has to look at her mail. She holds up a neatly handwritten thank-you letter she had received that morning, along with a check for $10, from a longtime listener.

“You may not realize how much time that would have taken her to write this note and check using a magnifying reader,” Evans says. “This is the sort
of stuff that keeps you coming back every day.”

These watches–and bracelets–will add a dash of distinction to any look.