Much of Kiley Stenberg’s life these days is spent on the road: This spring, as a new rep for a wholesale jewelry company, she counted on two hands the number of days in a three-month period that she was home.

When the 31-year-old Des Moines native is not between airports, she works from a cozy spot tucked under a bank of towering windows in a historic East Village apartment. Her computer is the only giveaway that there’s a workspace: The desk, the chair, the oversize print are all perfectly in step with Stenberg’s personal, contemporary style.

Stenberg has lived in several East Village spots, but this is her first with an at-home office. “Working at home takes some getting used to, but my favorite part of living downtown and especially working from home is that I can go a few days without ever getting in my car,” Stenberg says. “It’s nice to have a little area devoted to work, and I can catch up on things at night and on the weekends—but I have to be conscious about closing the computer.”

In fact, having an office in her 1,650-square-foot, loft-like home is a relaxing reprieve from her on-the-go schedule. “It’s such a treat to have a home you look forward to coming home to,” Stenberg says. “My only distraction is I can sit back and look outside the window at the neighborhood I love. But if I’m stressed, I can walk out and get a quick break or go for a run. You can fill your cup with other people pretty quickly.”

Brooke Avila nabbed one of the Liberty Building’s 16 condos when they were just raw spaces, and she was the first to move into the mixed-use facility. “I was living in Waukee and looking for an opportunity to be more connected,” says the 36-year-old Avila, who owns a marketing and consulting business.

That was eight years ago, and Avila has worked out of her 1,000-square-foot home ever since. She appreciates the amenities offered by Hyatt Place, which is also housed in the building, including spaces where she can meet and entertain clients. “For logistical reasons, it’s great; I have several clients who are downtown, so I can walk to meet them or pop over in a few minutes,” she says.

Her workspace consists of a large desk, placed in a corner but out of the way of the main living area. Coveted storage space comes from cubbies, while her visual “think tank” is a chalkboard wall. Some in her building use 100-or-so-square-foot storage spaces, located down the hall and with
separate doors and windows, as offices. But Avila likes getting up and getting to work, whether she’s spread out on her kitchen’s expansive island or tucked at her desk, plucking away at the computer.

“I enjoy the beauty of just getting started if an idea comes to me,” she says.

“It’s a balance when you’re self-employed and work at home, but I work hard to tell myself that I work from 8 to 5.”

When Andrea Metzler returned to Des Moines in 2014, she had been wandering and working for a while.

“I was a nomad; I lived in Austin (Texas) and worked for a startup, but I sold all my stuff and traveled for two years,” she says.

When she moved back to Iowa, she had two requirements: She needed a work-at-home space and she wanted to furnish it inexpensively. That led her to a 394-square-foot apartment in the Des Moines Building, where she fashioned a stand-up desk in a nook off the kitchen. “Our whole company is remote, and it’s nice just to be able to get up and get right to work,” she says.

The 30-year-old Metzler, who works for the same Austin-based company she did previously, filled the rest of the space with a quirky collection of midcentury style furnishings. Although her overall space is small, Metzler has tried to maintain a boundary between the work and living areas.

But it isn’t the minimal square footage that presents the biggest challenge, she says: “I just switched to a different position in the company, and I can work whatever hours I want, so I’m trying to find that balance. Do I keep working at 10 at night because I can?”

To help keep a more regular daytime schedule, Metzler sometimes works at the nearby Gravitate, a shared workspace in the Midland Building. “Being at home can be super distracting, so it’s nice to have a spot to go to once in a while, put my headphones on, and focus,” she says.

If there’s a theme to Alex Braidwood’s 750-square-foot work-live space in the East Village, it’s this: Make do. As an assistant professor of graphic design and of sustainable environments at Iowa State University’s College of Design, Braidwood, 36, is never not working, whether he’s in Ames or at home. His space, then, is only as good as its adaptability. “I make a lot of different types of work—digital, materiality—and I’ve always had to figure out how to work around things,” he says.

In fact, the space he found, located above Zombie Burger, is less important than the freedom that an apartment affords him and the similarities, however faint, it has to former homes in Detroit and Los Angeles. “I’m a fan of cities—I like to be able to walk to a restaurant or see a band,” he says. “My schedule is bananas, and nothing in my world is consistent enough to have rules separating work and home. Living in an apartment, there are certain things I don’t have to be responsible for.”

For most people, an open space in a one-bedroom apartment would give way to a couch, a dining room table and a few other amenities. Braidwood, who is also a sound artist, uses that open space as his work hub, with long, large desks/tables that can move as needed. A closet, which he affectionately calls his woodshop, holds tools, and the furniture is intentionally uncomfortable.

“I didn’t buy a couch, on purpose,” Braidwood says. “I’m either working or sleeping.” 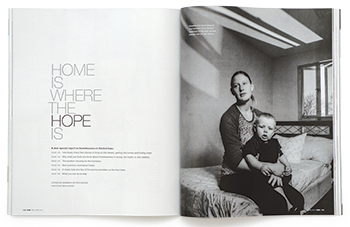 You Speak, We Listen On Facebook Family Guy Note from the editor: Many ...

Rescues we love and the people who saved them