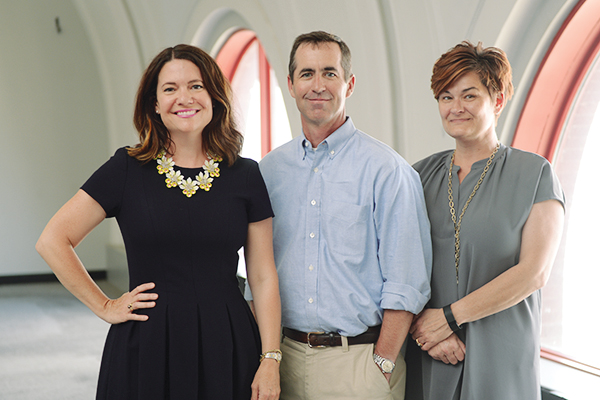 Men and women approach life differently, so why not business? Why not investing? That’s what the women of FIN Capital are putting to the test with Iowa’s first female-only venture capital organization.

FIN has just made an initial investment — a $109,000 stake in a Des Moines firm that is developing software for the insurance industry. Other potential deals await.

FIN Capital is an angel investor. “Angels” can be people or firms that provide development money to startup and young companies. Companies like Facebook and AirBnB got initial lifts from angels.

Angels have long operated across the land, including in Iowa. FIN, which stands for Female Investor Network, got its start in 2016 after encouragement from then-Lt. Gov. Kim Reynolds and Debbie Durham, director of the Iowa Economic Development Authority. The state offered some startup funding to defray overhead, and the Iowa Center for Economic Success, in Clive, was enlisted as its facilitator.

Originally, eight women joined. [The eight included Connie Wimer and Janette Larkin, the chairman and president, respectively, of Business Publications Corporation Inc., which publishes the Business Record and dsm magazine.] The roster grew to 28, and Megan Milligan, president of the Iowa Center for Economic Success, said it wishes to eventually number 50. One of those founders was Rita Perea, a Des Moines business consultant.

Several aspects of FIN prompted Perea to sign up. For starters, she said she is a huge proponent of women in leadership. And women have a good perspective on business that, while it may differ from that of men, is just as valid.

“We bring a certain level of intuition to the table,” she said. Women are good at collaborating, she added, which is helpful as a group makes the choice of which company to invest in.

Perea said she was interested to see whether she could make some money with FIN. That’s not a given. Angel investors are told they need to diversify with an average of nine or 10 investments to be successful.

Any angel investor should be knowledgeable about risks of the business world. Federal rules dictate that investors must be accredited. That means you’ll have a net worth of at least $1 million or two years of annual income of $200,000, or $300,000 with a spouse.

Once you clear that hurdle, you and the group will meet monthly. There will be discussion of investing methodology, chatter about deals that are floating around, and maybe a pitch from an entrepreneur.

Perea said angels want to hear a business plan, revenue projections, and an exit plan. (Sorry, startups, they eventually want their money back.) Members vote up or down on each pitch. If accepted, a deal goes to a team of members who conduct a due diligence review — a deep dive on the proposal and how it will make money building that proverbial better mouse trap.

The first pitch to FIN that made it through to success came from Gain Compliance. The East Village firm has designed software that streamlines how insurers file regulatory paperwork in states where they do business. In a town that thrives on insurance, this might be a good idea.

Burch La Prade, CEO of Gain, has worked with venture capitalists before on other startups and turnarounds.

“It was a really interesting dynamic,” he said of working with FIN. A chief difference, he said, was its team approach to due diligence.

And while angel investors typically will work only with one theme, such as agribusiness or biotech, FIN is not structured that way, said Milligan. It will work with different industries. And as LaPrade discovered, it will reach out to men, as well, to find worthy ventures.

Instant Liquidity an Asset with ETFs

BY STEVE DINNEN If you’ve seen your managed money drifting from mutual funds toward ...

Get a Refund on Value Added Tax

BY STEVE DINNEN If your bags brim with the finely crafted flannel shirts that ...

BY STEVE DINNEN Far be it for a casual observer of the economy in ...