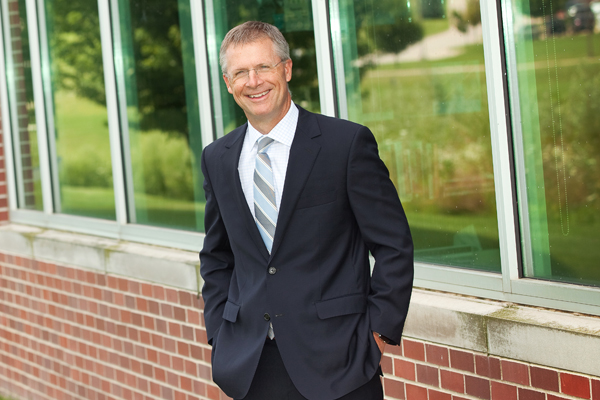 Above: Kent Kramer, chief investment officer at the Foster Group, says the presidential election will most likely have an impact on your finances, but that any new laws will take time to create and pass.

Elections have consequences. In just a month, a very important election will take place, and there will be an economic impact on you or your business. How big or small depends on whether Donald Trump or Joe Biden takes the day, and to help us sort it out we talked with Kent Kramer, chief investment officer at West Des Moines-based financial planning firm Foster Group.

The bigger impact will come if Biden wins. Looking at the platform that Democrats have developed, Kramer sees this on their wish list:
A rise in the top marginal tax rate to 39.6%, from 37% currently, for individuals with more than $1 million of income annually.
A rise in long-term capital gains tax rate to 39.6%, basically following rates for ordinary income. This departs from the current three-tiered rates of 0-15-20% depending on your income.
Raise corporate tax rates to 28%, from 21%.

Republicans are still sticking to the platform they released in 2016. For now they are adhering to the tax bill passed in late 2017 after Trump was first elected. Broadly, it lowered corporate tax rates to 21%, from 35%, and capped the top tax rate for individuals at 37%, slightly below the previous rate of 39.6%. That bill also capped deductions for SALT – state and local income taxes – at $10,000. That item worked against Iowans, who shoulder a relatively high marginal tax rate.

Republicans have also talked about expanding Opportunity Zones. Investments made inside these designated areas – there are dozens in Iowa, including two in Des Moines – can qualify for some generous tax breaks.

Either man in the White House will want to do something to overcome the economic impact of the pandemic. Biden will want to make some kind of law that announces his arrival as President No. 46.
“If Biden wins, there will probably be some kind of signature legislation” to mark his presidency, said Kramer. But he cautioned to not to immediately hit the panic button, because any lawmaking “will take months, not days.”

Kramer, himself a former legislator in Iowa, noted that the signature legislation for President Barack Obama, the Affordable Care Act, took 15 months to pass. Trump’s tax bill took almost as much time. This relative slowness is good, noted Kramer. “You can’t make good policy when you’re changing the rules every day,” he said.

But be assured change will come. We’ll just have to wait until Nov. 3 to get a peek at it.

BY STEVE DINNEN   You did well by your investments these past 12 months ...

BY STEVE DINNEN In the last issue of dsmWealth, we wrote about retiring in ...

BY KATY BARNATO, CNBC Rising numbers of female millionaires and billionaires around the world ...