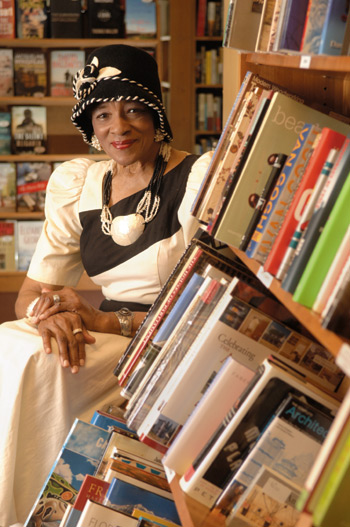 “All of my life, I’ve had mentors,” she says. “I had a mentor, a childhood friend, and I followed her to Iowa.”

Called “The Pinder Poet,” Hopson—whose lengthy moniker links the surnames of her father (Vaughn), her mother (Shirley) and her late husband (Hopson)—was reared in the segregated South by rigorous disciplinarians. “Pinder” refers to the peanuts that were cultivated near her home in Gowdy, Miss. (now part of the city of Jackson); her grandmother would boil them in a huge cooking pot for neighborhood gatherings.

“Living in Mississippi was very daunting,” muses the granddaughter of slaves. “I don’t marginalize anything too much in my poetry. But it’s very difficult for some to understand how absolutely repulsive it is living in a culture where you are limited. Coming to Iowa in 1952 was very liberating because it gave me a real opportunity to grow.”

Hopson first worked as a nanny and a housekeeper in Iowa. Then another mentor, Gwendolyn Fowler, opened doors by introducing her to cultured young black women who shared her ambitions.

Hopson puzzles over the power of racism.

“I could simply walk into a room, and people would react,” she recalls. “They’d jump out of the way if they thought I was close to them. To me it was amusement, how I could make them behave. I didn’t have any hate toward them. I just thought it was silly.”

Hopson was married to businessman Louis Hopson. Childless, she volunteered for decades as a court-appointed special advocate (CASA), while mentors—again—at US West Communications Inc. (now CenturyLink Inc.) promoted her through employment ranks to copywriter. She enrolled in writing classes and read poetry on local radio programs. In 2000, she received the Iowa Legends Poetry Prize. (To read a poem by Hopson, click here.)

Former news photographer John Gaps III, another mentor, published Hopson’s first book of poetry. “She’s practically a state treasure,” says Gaps, now a movie production company manager. “She will gently challenge you to live better. And she does it by example; she does it with her language.”

Hopson silently portrayed Belle in Des Moines Metro Opera’s 2008 production of “Regina” and was cast in the movie “The Bridges of Madison County.” “My part was cut, but I don’t care,” she says. “I had such a wonderful time!”

In life’s twilight, the poet herself now presides as a mentor.

She’s a mix of “beauty, grace and poise with enough bawdiness thrown in to make her fascinating,” says Jolene Pfaff, a West Des Moines documentary film producer, who met Hopson at a Toastmasters gathering.

“The minute she walked into the meeting, we were all transfixed by her commanding presence,” Pfaff adds. “Her words are measured and provide the insight of a well-lived life.

“I am honored to call her a friend, hero and mentor.”

Such concrete nouns need no cumbersome adjectives, which surely pleases The Pinder Poet.

Move over chardonnay and carbernet. Verdicchio, Zweigelt and other intriguing varietals have come to ...

A Sherman Hill homeowner transforms a once-forsaken lot into a peaceful garden respite that ...