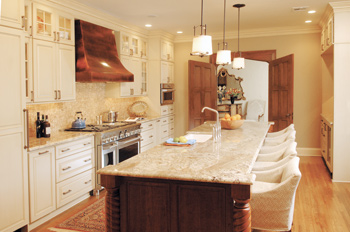 The Project:
Ron Lewis and Mary Day’s South Side kitchen. 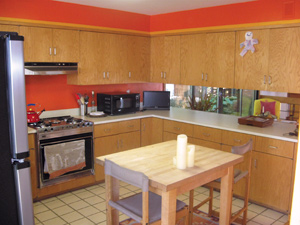 Before:
A wall of cabinets closed off the kitchen area to the front sitting room, obstructing the first floor’s flow. The appliances also didn’t work properly, and the floor tile and overall design gave the kitchen a dated look.

Makeover Goals:
The main goal was to update the flow of the kitchen. Lewis and Day wanted the redesigned kitchen to look seamless, as if it had always belonged in their Asian-inspired home. To that end, Silent Rivers designer Tyson Leyendecker sought to echo the stylistic elements of the home, especially its horizontal lines.
Another goal was to make the kitchen more conducive to entertaining friends and family. The renovation “came from a need that we had for more communication with the people we entertain,” Day says. “I fancy myself to be pretty good at creating meals, and I spend a lot of time in that kitchen.”

After:
The result is a sleek, contemporary, utilitarian kitchen with ample space for food preparation and entertaining. The butcher block complements elements in the sitting area adjacent to the kitchen, including oak flooring and a coffee table crafted from reclaimed bowling alley wood. The cabinetry’s wood grain and the backsplash help lead the eye around the room, reflecting the home’s horizontal lines, and the cedar drop ceiling adds interest and helps define the space.

The Project:
Warren and Margaret May’s South of Grand kitchen. 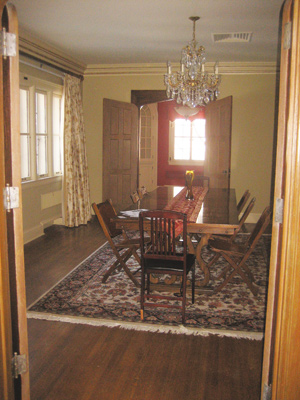 Before:
The former 185-square-foot kitchen (now the study) was located in the front of the house and contained cherry cabinets and red walls. Dated tile and fixtures didn’t match the grandeur and aesthetic of the Tudor-style home. The space where the kitchen is now was the former dining room (pictured below).

Makeover Goals:
The main goal was for the kitchen to serve the couple’s modern lifestyle while integrating elements that honor the house’s history and style. The kitchen makeover was part of a floor-to-ceiling renovation throughout the entire century-old home. “We wanted to take the house back to its original bones,” Margaret May says. “I know we needed the house and the house needed us.”

After:
The new kitchen is a nod to the past but is outfitted with thoughtful, modern accoutrements. A professional-grade range, lots of counter space, a well-laid-out work triangle, natural light and dimmable lighting make the kitchen easy to work in—if you cook, that is.
Margaret May, however, admits cooking isn’t her strong suit. She jokingly calls the kitchen “a room to walk through to get to the den.” Still, she’s exceedingly pleased with the space: 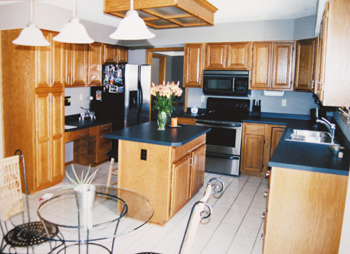 Before:
The kitchen was similar those found in many suburban homes, with built-in finishes, square ceramic tiles, neutral tones highlighted by golden oak cabinets and a fluorescent light fixture above the island. The dining room and kitchen were two separate rooms that didn’t flow into each other.

Makeover Goals:
The mission, Heath Hinkhouse says, was to make the space as open as possible while achieving a modern, minimal look. “We wanted to be able to accommodate more people in the same size house,” he says.
The Hinkhouses also wanted the redesign to reflect their personal style and design aesthetic. Before renovating their house, the couple had considered building a new home. But then they had a light-bulb moment. “Almost everything we liked we had: the neighborhood, neighbors, mature trees and access to trails and parks,” Heath Hinkhouse says. “The only thing we didn’t like was our house.”

After:
The kitchen was transformed into a streamlined modern oasis. More natural sunlight brightens the room, but most noticeable is the way the the dark statement cabinets both complement and contrast with the white countertops and cherry floors. “I liked the cabinets so much, I did the same style in my own house,” says Carrie Norris, project manager and general contractor with Grand Homes & Renovations.

Detail of one of the five untitled sculptures located along the Principal Riverwalk near ...

For more than 25 years, a statue of a winged naked man riding a ...