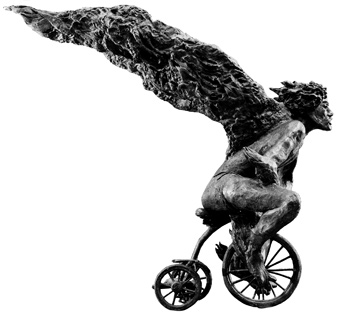 Five years ago, I was passing through my hometown of Des Moines during a road trip with a friend and suggested we go to Merle Hay Mall’s food court, my favorite place to eat as a kid. “You have to see this huge statue they have in the main walkway,” I said. “It’s a naked guy with angel wings riding a tricycle.”

My friend looked at me with an eyebrow raised. “A naked guy at the mall?”

We pulled into the mall for lunch, but the statue was gone, along with the fountain and most everything else I remembered about Merle Hay Mall, except for a sporting goods store and a Pizza Hut. I spent the rest of my trip Googling the statue, but there was little information about it online at the time; I couldn’t find a single photograph.

The statue soon became something of an obsession for me. In my day job writing young adult novels, I began to write it into books (though I had to convince one editor that it was real). On my night job leading ghost tours of Chicago, I began to ask customers from Des Moines if they remembered the “naked trike angel.”

Most of them did. Some remembered being afraid of it, and one remembered being afraid to be seen near it, for fear that people would think she was examining its “nakedness.” But no one seemed to think there was anything all that unusual about the statue at the time; for a generation of Iowans, the statue was simply a part of the landscape, like the statues of the “Fry Guys” and the “Apple Pie Tree” at the McDonald’s in the mall basement (which is also gone now). Perhaps we thought every town had a weird statue at the mall.

But in the 12 years since the statue was removed from the mall, it’s taken on the status of an urban legend. For a while, a friend and I planned to make a documentary about the search for the statue, which we planned to call “Where in the World Is the Naked Trike Angel?” We suspected it was still in Des Moines, but I’d heard all sorts of theories. Some said it was removed and melted down after too many people complained that it was inappropriate for a family setting. Others thought it was still hidden somewhere on the mall property, and one person was sure it was in a European gallery. A few had heard it was in a private mansion.

But before we could take off to film the movie, I’d solved the mystery—I’d gotten adept at digging up old stories and getting to the bottom of them in my job as a Chicago tour guide, and solving one where most of the major players in the case were still alive (a rarity for me) turned out to be fairly easy. With just a few phone calls to the mall office and a handful of telephone interviews, I was able to put the story of the remarkable sculpture, and its current whereabouts, together. 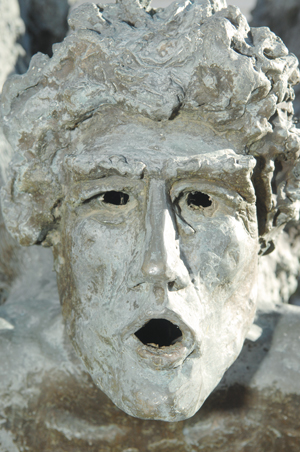 The Beginning
When the mall was originally built in 1959, it actually put Des Moines on the cutting edge of suburban retail space. It seems impossible to imagine now, but in the 1950s the term “shopping center” was only a few years old.

In those days, an Austrian-born architect named Victor Gruen was designing the first major indoor suburban shopping centers—today, he is considered the “father” of malls. Gruen planned for malls to be an American version of the town squares he remembered from Europe: places where people would go not just to shop, but to hear lectures, play chess and enjoy works of art. (Lest we think he was too much of a utopian visionary, though, it’s worth noting that he also pioneered the use of playing music at low volumes, having benches too uncomfortable to sit on for long and other tricks to stimulate sales.)

The Chicago-based developers of Merle Hay Mall were aware of Gruen’s work and incorporated some of his ideas into their plans for a shopping center in Des Moines on the site of a former monastery. The initial version was actually an outdoor plaza; when I was a kid, I still had a few teachers who referred to the mall as “Merle Hay Plaza.”

When the mall was enclosed in 1972, developer Len Lammensdorf wanted to create a “fun” space for everyone, and commissioned Mark Jacobsen, a young Santa Monica artist, to create something. Jacobsen had been supporting himself working in charcoal and pastels but took this opportunity to create a three-dimensional work. He made several small samples of ideas, and the one Lammensdorf liked best was UpDown, the naked angel on a tricycle. Jacobsen created the 18-foot sculpture in his studio and designed a sloping brick base for it, and the finished product was installed at Merle Hay in 1974.

The installation was not without controversy; The Des Moines Register featured several articles about how people reacted to “The Winged Rider of the Mall” in its early days. One man told the Register he didn’t know what it was supposed to “represent,” and, though he wasn’t bothered by the nudity, he wasn’t wild about the sculpture in general. “Wings on a man on a tricycle?” he asked. “That doesn’t do much for me.”

His wife was even less thrilled. “If it’s nude,” she said, “it’s offensive.”

Harry Frohwein, the general manager of the mall at the time, told the same reporter that UpDown “wouldn’t cause very many comments at an art center, but this is a shopping center where you have hundreds of thousands of shoppers. And some people are unhappy. It’s controversial.”

Still, this was the 1970s, an era when children’s book authors got away with things I could never get past an editor
today, and Lammensdorf was able to brush off the controversy. “The fact that it’s nude, I take very lightly,” he told a Register reporter at the time. “I just can’t believe that Des Moines is still in the 19th century. My experience with Des Moines people is that they are open-minded. … It might have been safer not to put in Mr. Jacobsen’s art; we might have put in flowers and done just as good a business. But we wanted this to be a fun place.” Art, he believed, was for everybody—not just for people who go to museums or pay admission to art centers. Recently, in a phone interview from his California home, Lammensdorf told me that he came into town when it was installed and attended a few public meetings about it, during which he said he thought the fact that children were fascinated by it was a positive, not a negative, and seemed to win people over.

He seems to have convinced most people; any controversy that may have surrounded the statue died out quickly, and it became enough of a beloved part of the mall to be featured in advertisements. Some pinpoint it now as one of the first works of public art in Des Moines.

A New Home
UpDown remained a part of the mall for more than a quarter century before it was removed in 2000. There was no drama or controversy behind the removal—the control of the mall had simply changed hands, and the new owner didn’t seem to like it. Linda Johnson, the longtime manager of the mall, initially looked for a buyer, but to no avail. None of the art centers or museums she contacted was willing to take it on, and for a time, there was a danger that the best option would be to sell it for scrap.

But throughout the search, she received half-joking offers from Jerri Scott, an acquaintance who had always loved the statue. Scott herself called her offers “ridiculously low.” But when no other offer was forthcoming, Johnson asked Scott if she was serious. Scott was, and she happily wrote a check for an undisclosed sum to the mall, as well as a far larger one to the monument company that moved it to her East Side home.

And that’s where it remains today, a sentinel in her garden, keeping watch over the plants that grow up around it. (The sloped brick base didn’t make the move with the statue.) Scott and her friends call the statue “Merle,” a name bestowed upon the winged rider by the movers who installed him in the garden.

Over the years, she’s welcomed fans who’ve successfully sought out the now-legendary statue. “UpDown makes me laugh and I love him,” she told me when I first contacted her. “Recently, I found another detail I’d never seen before. He continues to surprise me.”

“Merle” couldn’t ask for a better guardian. When I first visited the statue at its new home, Scott showed me lots of touches that I’d never noticed as a kid, like the eagle faces built into the wings, the J (for Jacobsen) on the wheels, and the face on the end of the penis, which can only be seen if you look underneath.

An Urban Legend
As UpDown has become something of an urban legend, it has increased in value; Scott recently turned down a five-figure offer (she declines to specify the exact amount) from a restaurant.

MD Isley, executive director of Bravo Greater Des Moines, hopes to one day see it return to public display. “We’ve got a good movement of interest in art in the city now,” he told me. UpDown is “a bit iconic. It has a connection to the heritage of a certain group of residents in Des Moines, and that’s important for the fabric of the community.”

Mark Jacobsen, the sculptor, went back to school and became a lawyer shortly after completing UpDown. Now living in Honolulu, he recently retired and returned to art full time. In a phone interview, he said he’s been amazed by the resurgence of interest in UpDown “after so many years of obscurity,” when the statue was standing in plain view to hundreds of shoppers every day. He was thrilled to hear that kids used to climb on it, as he’d always hoped they would.

I told Jacobsen that I’d recently shown a picture of the statue to a Des Moines resident who was on one of my ghost tours. The man was amazed to see it because though he remembered the statue, he had come to believe it was just something he dreamed about once—not something that was ever actually at the mall.

Jacobsen laughed. “Sometimes I think the same thing myself,” he said.