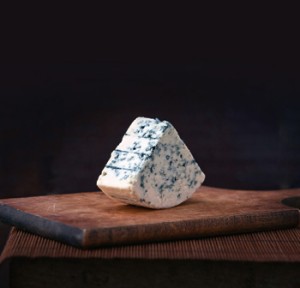 Over the last two decades, America’s infatuation with all things food has turned chefs into stars, farmers markets into community gathering spots and family farms into brand names. Now, local artisanal cheese makers are the nation’s new darlings, and Iowa has a handful of noteworthy makers within driving distance of Des Moines. On a nippy morning last fall, a group of Winefest Des Moines patrons boarded a minibus to Newton for a behind-the-scenes tour of one of Iowa’s oldest makers, Maytag Dairy Farms. I pondered: Will the cheese taste different at the source? How does a family of appliance magnates wind up in the cheese business? Then I gladly hopped on board.

First Glance
Though the renowned Maytag Blue Cheese is no stranger to Iowans—and is shipped nationwide—where and how it is made is off the radar. I expected an industrial-style factory. Instead, our 45-minute trek took us down a winding road that’s best described as Iowa idyllic to a historic family farm.

The blue cheese is still made in the same whitewashed barns where Fred Maytag II crafted his first wheel in 1941. Even the recipe is the same.

Quick History
According to Myrna Ver Ploeg, the president of Maytag Dairy Farms and our spirited tour guide, in 1919 E.H. Maytag, son of Maytag Corp. founder Frederick Louis Maytag, established a herd of cattle as a hobby farm. Turns out he had a knack for raising dairy cows, and by the 1930s, his Maytag Holsteins gained fame in competitions across the continent. Fred Maytag II, E.H. Maytag’s son, succeeded his father on the farm, but transformed the sweet cow’s milk into blue cheese, using a newly developed method from Iowa State University. France’s well-known Roquefort was made from sheep’s milk, so this was an American twist on tradition.

Today’s Blue
The dairy is still owned by 11 Maytag family members. Instead of dying out or going big like other cheese makers who started around the same time, Maytag is run much the same way it always has been. The cows are no longer on the farm, but the milk is trucked in from small farms in a 20-mile radius, with 98 percent of the cows still being Holsteins. How much cheese is made each day is dictated by how much milk the cows supply, which often depends on the weather. Five days a week the cheese makers turn three to six vats of milk into wheels of cheese, first adding culture and rennet (creates curds and whey), then Penicillium roqueforti, the stuff that creates the blue veins. Finally, the wheels are aged in underground caves attached to the barn for about six months or until deemed ready. A few whiffs will tell you this is a cheese farm.

Anyone Can Visit
If you decide to experience Maytag blue at the source, keep in mind you won’t get to put on a hair net and walk through the cheese barn (for bio-security reasons), but you can view a short video on the cheese-making process and take a guided tour of the packaging facility, which is an expanded version of an original farm building. Here’s where you get that small-town sense of pride and a sample of the cheese experience. All the employees are local residents. Shirley Schmidt, a longtime Maytag employee who’s over the usual retirement age and still smiling, gave us a theatrical demonstration through the glass observation window of how she hand-wraps wedges and wheels in the company’s shiny signature foil.

The mini cheese shop is in the same building. Head there for cheese tasting. I sampled plenty—all in the name of research, of course—and yes, it does taste even more amazing on-site. The shop also stocks other Maytag cheese varieties you may have seen at the Des Moines Downtown Farmers Market or in the Maytag catalog. Other Midwest small-scale cheese makers produce these cheeses, using Maytag recipes (including Swiss, cheddar, Edam, brick and cheese spread). If you catch a whiff of popcorn popping, that’s because popcorn is harvested, shelled, packaged as kernels and sold on the premises just like the cheese. To check out the popcorn fields, head to the far end of the parking lot.

Love Your Cheese
My trip ended with a two-pound wheel of Maytag Blue tucked in my bag, so I asked Ver Ploeg for advice on how to store my stash and ideas for serving it.

Storage: “The cheese keeps a good flavor profile for six to eight weeks after purchase,” Ver Ploeg says. Keep it wrapped in the refrigerator. “Or freeze it,” she suggests. “Cut a wheel into serving sizes, place in freezer bags, then put them in the freezer for up to one year, thawing in the refrigerator for 24 hours.”

Serving: Ver Ploeg recommends serving cheese at room temperature. Take it out of the refrigerator 15 to 20 minutes before serving. This enhances the flavor and turns the veins in the cheese a more vivid blue.

Cooking: Ver Ploeg’s new favorite appetizer begins by hollowing out a 1/8-inch-deep well in the center of a wheel of blue cheese, leaving a rim. She then pours a jar of pecan bourbon sauce (Maytag sells this in the store and via mail order) over the cheese and serves it with pear slices and crackers.

For dinner, Ver Ploeg buys thick salmon fillets and cuts a fairly large horizontal slit or pocket in each. She makes a simple bread-cube stuffing with a little blue cheese stirred in and stuffs some into each salmon pocket, then bakes the fish about 20 minutes until the salmon flakes with a fork. She also loves blue cheese crumbled over steamed veggies such as Brussels sprouts or asparagus.

Check out these Iowa cheeses worth sampling, all available in Des Moines. Some of the cheese makers offer on-site visits.

From Drab to Dazzling

We checked in with four local designers to find out their current favorite paint ...

For more than 25 years, a statue of a winged naked man riding a ...