Reservations at the Rainbow Cafe were nearly impossible to snag. For access to the micro pop-up restaurant, which featured a prixe fixe luncheon served to a country-club clientele, you had to know someone.

Invitations to the exclusive event in August came from the maitre d’ and the sommelier, Kathy and Steve Zumbach, respectively. But in this venue—their home in West Des Moines—they go by Nana and Papa. What’s more, their granddaughters, 6-year-old Kylee and 4-year-old Kenzie Hu of Edina, Minn., serve as the hostesses. And the price of the luncheon? $3.

“The little girls always love to play restaurant, and we love to role-play with them,” well-known Des Moines attorney Steve Zumbach says on the day of the event, as he helps put finishing touches on the floral pinwheel decor and greets the caterer. “We get carried away.”

It is just play, but with real benefits.

The concept came about over a spring break vacation last March in Palm Springs, Calif., where the entire family spent a week relaxing together. During a summer visit to Nana and Papa’s, why not play restaurant with real customers and real food?

In Steve Zumbach’s mind, it would be an opportunity to teach his granddaughters real business skills—income statements, revenue, price, market, bookkeeping. “Kathy thought that was a little over the top,” he says.

She instead proposed a $3 luncheon menu, with a dollar going to each of the girls and a dollar to the Food Bank of Iowa. Kylee and Kenzie could get practice counting out change from their toy cash register, and learn about contributing to a charity that made sense to them.

“They understand there are people who need food and that some children go hungry,” Kathy says. “Kylee wanted to have meetings all the time and took notes. She would ask, ‘Who’s going to do that?’ and had everything mapped out.”

The girls decorated the dining area with their artwork, designed an invitation, set the tables and counted out chocolate coins (there’s always gold at the end of the Rainbow Cafe) to serve as favors.

On the day of the luncheon, the dozen guests are seated in intervals, and it is the girls’ responsibility to greet them with handwritten menus and circle their orders in special sparkly notebooks.

The guests play along. “I read on Yelp that this is the place to be for restaurants and cafes,” says Mary Radia. Donnie Blumenthal, meanwhile, nearly derails hostess duties when he arrives with a box of dolls. Other guests include Nancy Knapp, Suku Radia, Becky Joseph, and Mark and Ginny Haviland.

“This is a way for our friends to meet (our granddaughters),” Steve says.

“Sommelier Papa,” who moonlights as a corporate attorney at Belin McCormick when he’s not twisted around the finger of his grandkids, wears a tuxedo as he weaves between the three tables, pouring wine for guests. Kathy sports the same white Rainbow Cafe apron as the girls, and all are appointed in crisp black-and-white ensembles.

Kylee and Kenzie scurry between the front door, dining room and kitchen, where they help plate fruit salad. Cyd Koehn, of Catering by Cyd, takes care of the gazpacho amuse bouche, chicken artichoke salad, quiche and dessert. It’s quite a step up from the bowl full of deflated balloons Kylee says they typically serve when they play restaurant for pretend.

From the looks of the food and happy chatter among the guests, the Rainbow Cafe appears a success. “I heard next year it’s going to be a bed and breakfast or a wellness spa, and I’ll come for the weekend!” jokes Connie Beasley.

Steve Zumbach shoots her a wry don’t-be-giving-these-girls-ideas look, but he doesn’t actually say no: “Kids love projects, and anything those little girls want to talk about, we like to talk about.”

It’s never too early to begin sharing the joy of giving with the next generation. “It is important for children to experience giving in action,” says Kristi Knous, president of the Community Foundation of Greater Des Moines. She offers these tips for engaging kids and grandkids in family philanthropy:

Incorporate giving into their budgets from the beginning. “It can be as simple as having children divide their allowance into three jars marked ‘spend,’ ‘save’ and ‘share’ and discussing where to give the money in the ‘share’ jar,” Knous says.

Demonstrate how giving is about more than money. “Volunteer as a family,” Knous says. “For young children, consider activities like picking up trash at your local playground. As they grow older, engage children with organizations that support specific family interests, like volunteering at an animal shelter or serving meals to those in need.”

Lead conversations. “It is important for families to share stories and discuss why they give,” Knous says. “At the Community Foundation, we work with families to develop mission statements summarizing their values and clarifying their charitable goals. This helps guide giving strategies and creates generations of givers.” 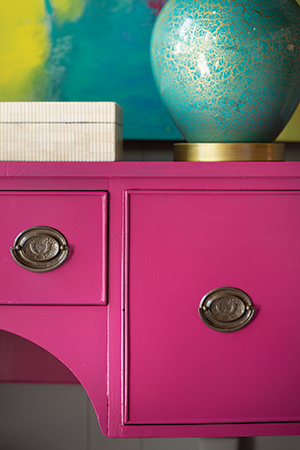 Looking for an easy way to invigorate your decor? Change your home’s color palette ...

Calendar What’s on our calendar for November and December. Celebrate … … the inspiring ...

A book project explores the breadth and depth of religions practiced in Greater Des ...