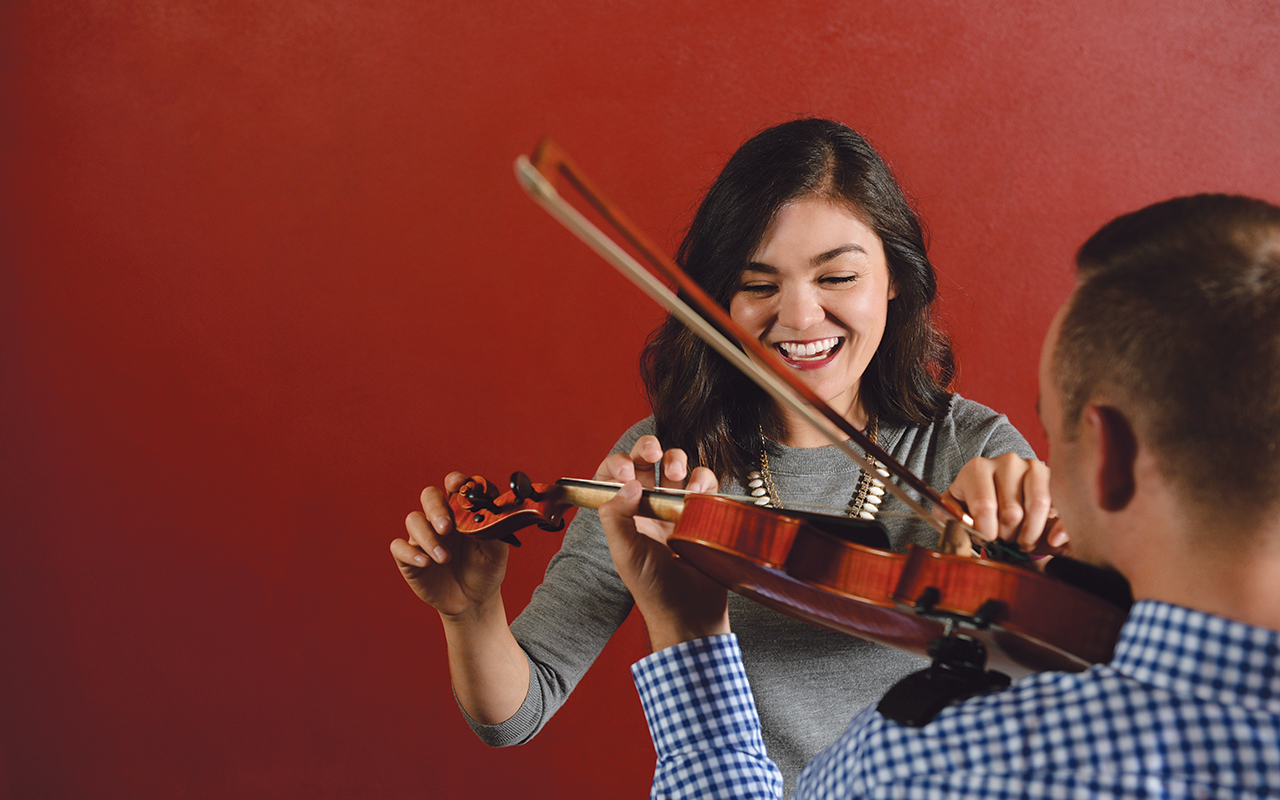 Des Moines Symphony violinist Hanna Wolle has great fun showing non-musicians how to handle her instrument at Remix events, tailored to engage a younger audience with the orchestra’s programs.

“We have a duty to make the world a better place than how we found it. Giving back is something we should all do.”

LINC (which stands for lead, impact, network, change) provides the opportunity for Arganbright to interact with like-minded individuals while volunteering for nonprofit organizations. It has deepened her relationship with United Way, she says.

Engaging young professionals and cultivating new generations of donors has become a vital goal of community leaders and nonprofit organizations. They’re aggressively seeking ways to connect with more donors like Arganbright, who understand the value of giving their time, talent and treasure.

Research shows that millennials are looking for new ways to get involved with organizations they support. Those in this demographic cohort—typically defined as those born between 1980 and 2000—generally view philanthropy as a lifestyle choice, similarly to how they might choose the brand of shoes they wear or the model of car they drive.

Nationally, the behaviors of this generation have been studied for a decade and recorded in a series of reports by the Millennial Impact Project. One key finding: This generation is most likely to give to an organization when they understand the meaningful effect their gift will have. Additionally, sharing philanthropic experiences with their communities—both virtually through social media and in person with others—is important.

Igniting a Passion
That information affects the actions of local groups such as Maddie’s Circle, which seeks to ignite a passion for philanthropy and volunteering. Maddie’s Circle was founded in 2008 in honor of the late philanthropist Madelyn Levitt. Until this summer, members formed “circles,” and individuals within those small groups identified their passions and corresponding fund recipient organizations. Recently, however, members sought new ways to keep the circles fresh and engage new, younger givers.

“I’m a big proponent of having philanthropic stewards of the future,” says co-founder Lynn Graves.

Even as she lauds community leaders and the many ways they drive the region forward, she recognizes that they will not always be around: “It’s really important that we keep that consistency rolling,” she says, “so we don’t end up with gaps where we are not helping the community.”

As long-standing donors age, organizations need to develop their “next generation of leaders and givers, continuing that charitable spirit and providing the tools to be able to do that well,” says Greater Des Moines Community Foundation President Kristi Knous, who serves as a fund adviser for Maddie’s Circle. “We’re going to have to do a good job on our end in educating why giving locally is important.”

To that end, Maddie’s Circle launched a new format in June. Through an RFP process, it awarded grants to five organizations with programming that cultivates young philanthropists and community leaders.

Among the five grant recipients was the Chrysalis Foundation, which helps fund key programs and organizations serving girls and women in the metro area. Specifically, the $29,600 Maddie’s Circle grant will support Chrysalis’ Fund Forward program, which connects the organization with a new generation of donors.

“This is the generation that likes to see more immediacy; they like to see what a difference the donation is making,” says Chrysalis Foundation Executive Director Terry Hernandez.

Tactics such as social media, networking, interactive activities and “friendraising”—where donors bring friends to events to introduce them to the foundation—are a departure from the traditional letter writing or coffee meeting for donation solicitation, Hernandez says.

Another recipient of a Maddie’s Circle grant was United Way of Central Iowa’s LINC effort, which launched locally in 2016 after organizers reached out to other chapters in search of ways to attract younger donors. LINC was already active in 20 other markets. Members are age 30 and younger, and each contributes $250, which supports programs that provide resources for basic needs such as housing and food. LINC is represented in United Way’s leadership, as members hold cabinet positions that influence the direction of the organization. Activities includes “do-good time” that fills up social calendars with volunteer and professional development opportunities, as well as happy hours.

A recent volunteer opportunity brought members together to mulch an Oakridge Neighborhood playground. Attendees then gathered at a local bar to unwind and connect.

LINC, which currently has around 100 members, deepens United Way’s community ties to young professionals. “We know according to our data that we have more than 60,000 individuals in the workforce under the age of 30,” says Melanie Campbell, chief donor engagement officer. “We want to engage them.”

The Arts and the Future
Arts and cultural organizations are spearheading young professional-focused cultivation initiatives, as well.

This past January, the Des Moines Symphony launched a series of events dubbed Remix. Geared toward helping young patrons experience the concert hall as a more casual environment, the symphony has partnered with organizations like Young Professionals Connection and local breweries to offer free evening events featuring music and networking. The first two Remix events attracted nearly 500 people combined. The orchestra has three more planned for the current season.

Mary Honeyman, 27, is a digital marketing manager at Meredith Corp. and a member of the symphony’s marketing committee, which helped drum up the idea for the Remix format. The events fit into millennials’ busy social calendars while creating “awareness of and engagement with the symphony,” she says. At Remix, a symphony concert experience—such as a pre-concert talk by Drake professor Eric Saylor and an opportunity to sit in on a symphony rehearsal at the Des Moines Civic Center—is paired with fun touches like complimentary beer and pizza, a raffle, a photo booth and a chance to conduct a small ensemble.

In addition to engaging young professionals, the events prime guests for a lifelong appreciation for live classical music. “A lot of our patrons have a story of how they were first introduced to music at an early age,” says Dustin Ross, the symphony’s director of development, noting that classical music concerts typically attract a more mature audience.

“We think it’s important to engage the up-and-coming young professional group with the orchestra and with other arts and cultural events throughout the city,” he says.

Earlier this year, the Des Moines Public Library Foundation launched a young professionals group called The Next Chapter. Its first event, Books and Brews, took place in January at Madhouse Brewery and included a presentation by a brewer, complemented by homebrew books pulled from library shelves.

While most of The Next Chapter’s events are free, the group also offers discounted tickets to library foundation events. Right now, events typically draw between 15 and 30 people, and organizers expect it to grow as programming evolves and word about the group spreads.

“We want members to be involved in the community and with the library,” says Shannon Sole, 34, one of The Next Chapter’s founders. “It’s a good way for people to meet other YPs with similar interests and goals.”

Sole believes the group is a resource for millennials to understand the library’s expanding role in an ever-changing digital world. “The library can seem antiquated … but it has so many resources beyond books,” she says. “It is helping those with the need for résumé-building and technology. The Next Chapter makes [members] aware of the resources the library has so they can act as ambassadors in their own right.” 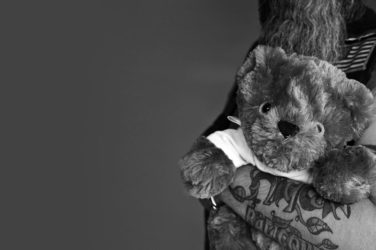 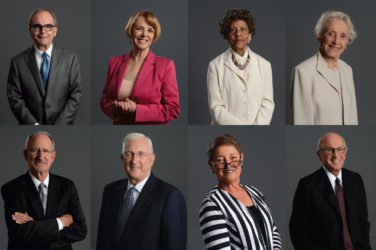 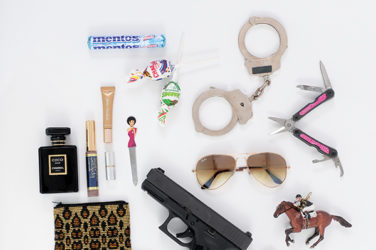 The Things They Carry – Nov/Dec 17