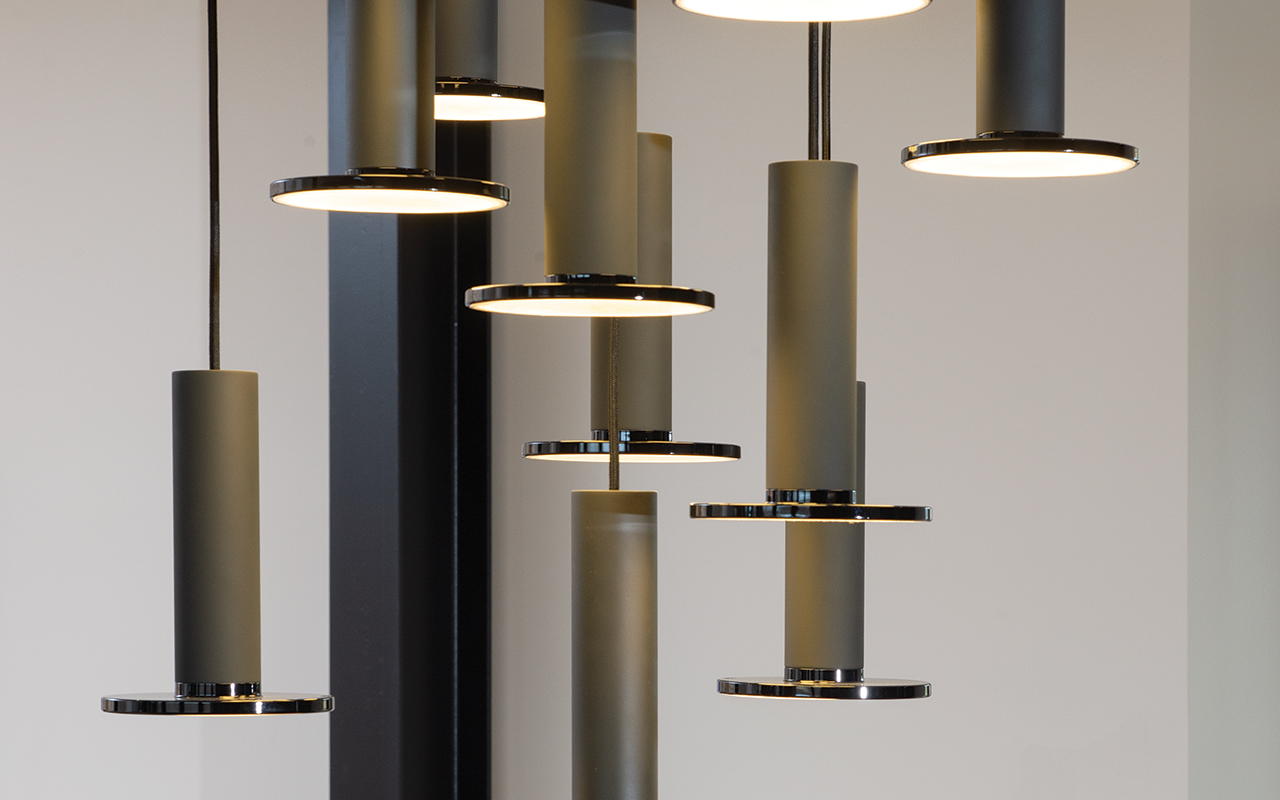 Above: The dramatic pendant chandelier in the dining room “is an art piece in and of itself,” Davis says. With the home’s high ceilings and open floor plan, “we needed something interesting and impressive that could ground the space.”

The entryway of this Johnston home features the same Wisconsin stone as the exterior, creating a consistent visual line. Nemo’s “Spigolo” drop chandeliers from Projects Contemporary Furniture not only serve as lighting but as “a dangling piece of art,” says interior designer Hal Davis. Artistic Iron Works in Des Moines created the handrails, while Bob Cooper Woodworking in Grimes custom-made the walnut steps. A work by mixed media artist Justin Beller provides a focal point. A common prairie-style element, the horizontal windows let in plenty of light.

Walt Disney reportedly said, “There’s no magic in the magic. It’s all in the details,” an assertion that became a mantra for interior designer Hal Davis during a 17-month homebuilding project in Johnston.

“Every feature was thought out, every detail meticulous,” Davis says.

Walk into the home and that immediately becomes evident—in the smooth transition between the outside and inside; the layout and flow between rooms; the flooring and cabinetry; and the finishes, furnishings and decor. Every element melds seamlessly to create a refined, inviting and harmonious environment.

“I had some sleepless nights putting all this together,” Davis admits. “I essentially became a part of the family during the project.”

The homeowners (who requested anonymity for this article) credit Davis with taking their inchoate ideas and working with builder Ben Harrington of Harrington Homes to turn them into their dream home. Davis guided nearly every detail—from the shingles to the doorknobs—and kept the project on track, they say. 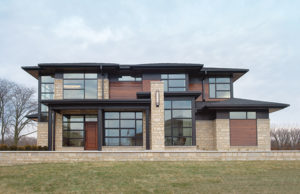 The homeowners’ initial vision included several overall goals, including creating an aesthetic that was modern and clean, but also warm and comfortable. What’s more, they admired Frank Lloyd Wright and some of the design features he espoused.

With those concepts in mind, Davis planned and developed a contemporary look that expertly combines various influences. He adapted some of the prairie style elements Wright popularized, such as integrating the exterior and interior, incorporating rustic, organic elements like natural stone and cedar, and eschewing heavy window treatments to allow in light and enhance the indoor-outdoor link.

Meanwhile, steel black beams and clean lines provide a modern edge, while the use of textures and a warm color palette lends a homey touch. For furnishings, Davis turned primarily to Projects Contemporary Furniture in Des Moines, Dwell Home Furnishings in Iowa City and national retailer Design Within Reach.

Davis and Harrington worked together from the start, before construction even began. The homeowners say the arrangement helped make the entire process—including figuring out those innumerable details—run more efficiently and smoothly. Construction was completed last October.

The homeowners “gave me carte blanche,” Davis says. “I couldn’t have asked for a more rewarding project.” 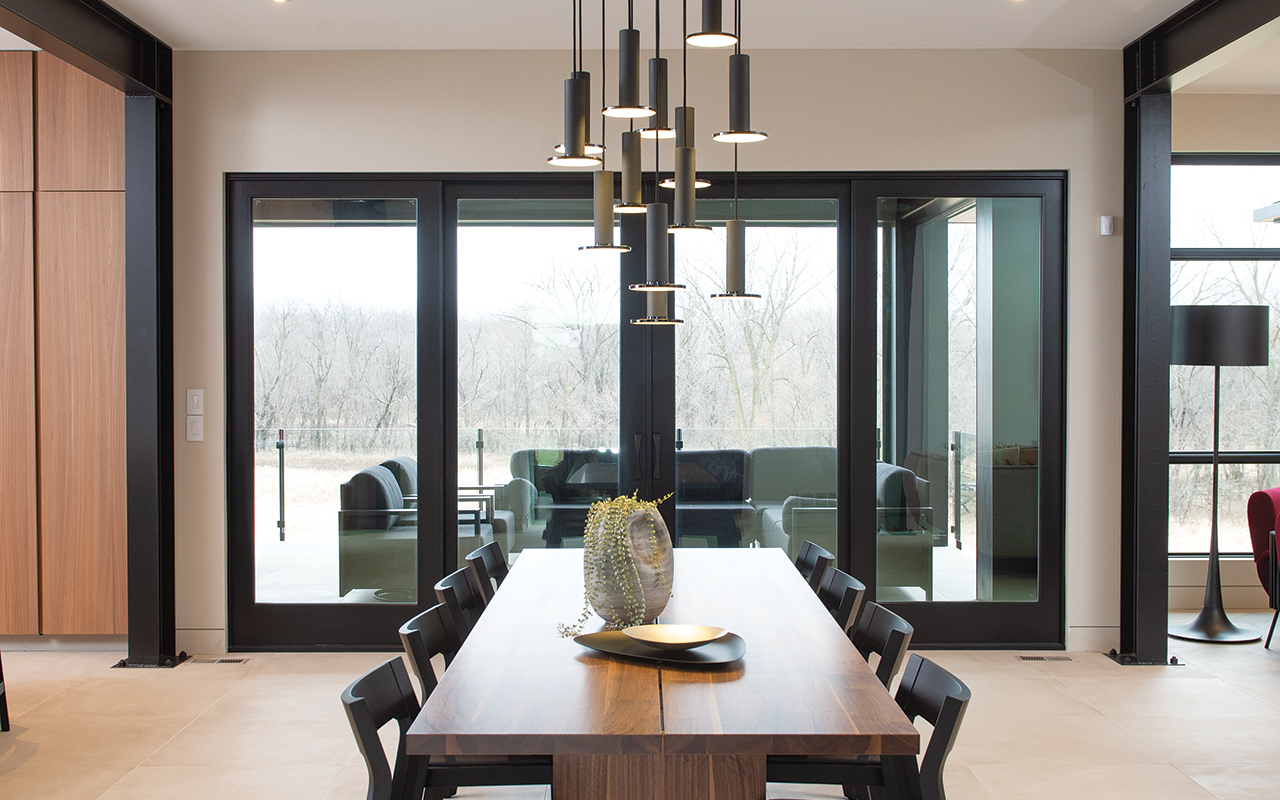 Designer Hal Davis chose the dining area’s furnishings from Design Within Reach. The “Gather” walnut dining table, which is the same color as the staircase steps, ties in with the color of the kitchen cabinetry. “Profile” chairs with black leather seats complement the striking “Cielo 13” chandelier, the decorative steel black beams, and the trim around the door leading to the patio and the expansive view beyond. 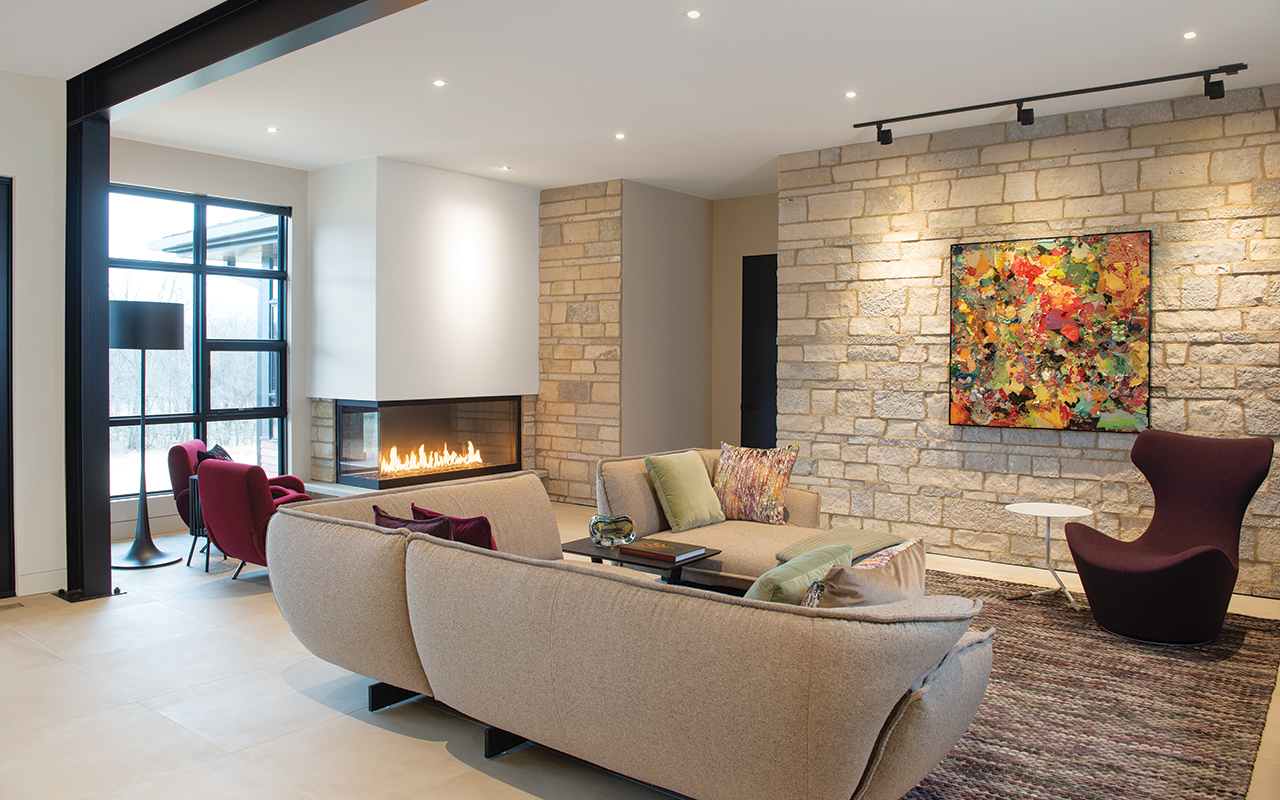 The living area shows a strong Frank Lloyd Wright influence. The Wisconsin stone on the wall is the same as that used on the exterior and in the entryway, ensuring a consistent flow, a concept Wright incorporated in his homes. Wright also liked to place fireplaces in different parts of rooms—not just in the center, Davis notes. “We put the fireplace in the corner to create a cozy nook,” he says.

The room’s furnishings are from Projects Contemporary Furniture. The eye-catching burgundy and plum tones of the mohair Cassina chairs near the fireplace and the wool “Grande Papilio” armchair by B&B Italian are echoed in the couch’s pillows and the artwork by TJ Moberg. A heavy knotted rug, from Dwell Home Furnishings, and a Cassina multi-tweed wool sofa help soften the space with texture and warmth, while a white Ligne Roset side table provides a sleek accent. 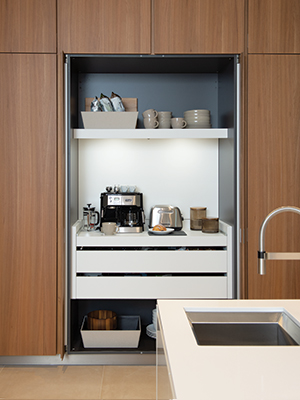 Behind a pocket door in the kitchen, a coffee machine, toaster and other frequently used items remain handy. When not being used, the area is easily closed off, keeping the kitchen clean and clutter-free. 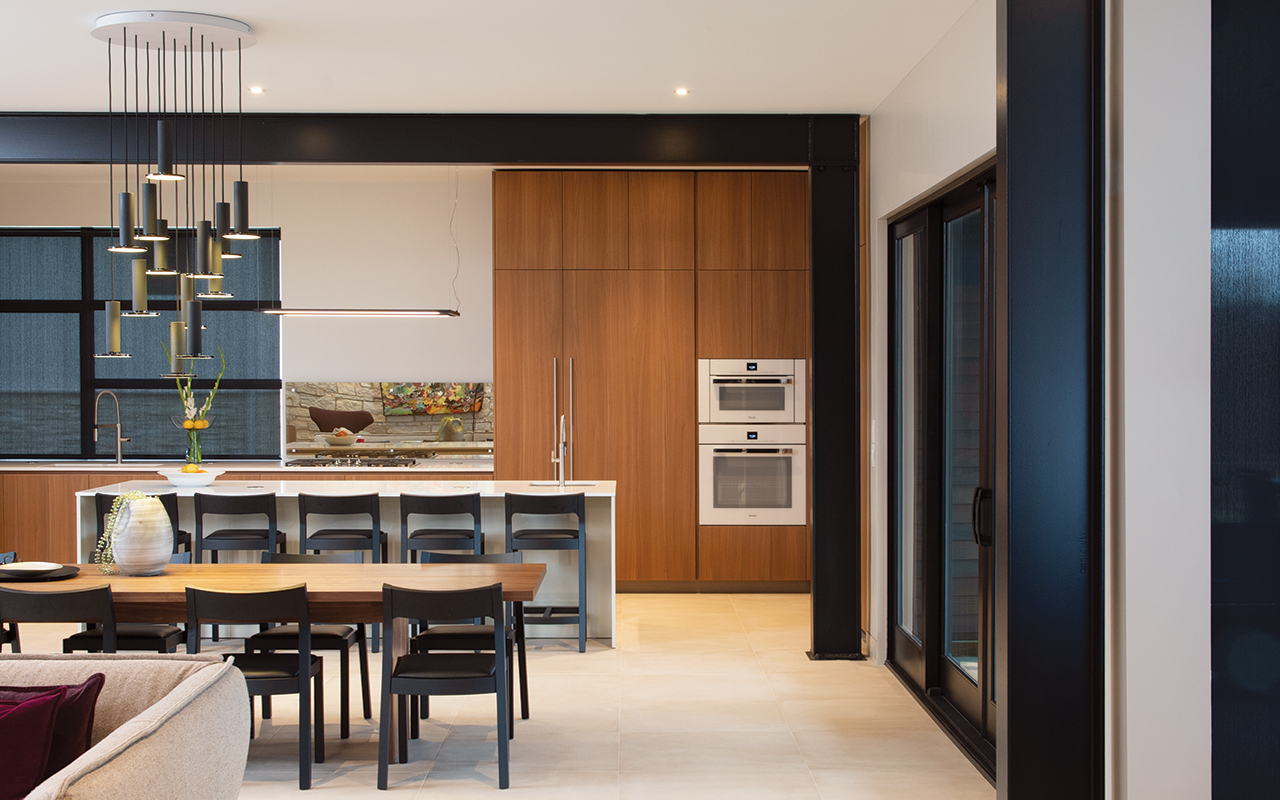 Decorative steel black beams delineate the kitchen, dining room and living room in the open floor plan. Along with stone and wood, the beams are another element carried from the exterior to the interior. The beams help “add a modern, industrial feel to the space,” Davis says.

The floor consists of 30-by-30-inch natural porcelain tile from Italy. The same tile extends outside to the patios, “keeping the flow continuous,” Davis says. The floor tile, lighting and beams were all laid out in a strict grid, which enhances design continuity, he adds. 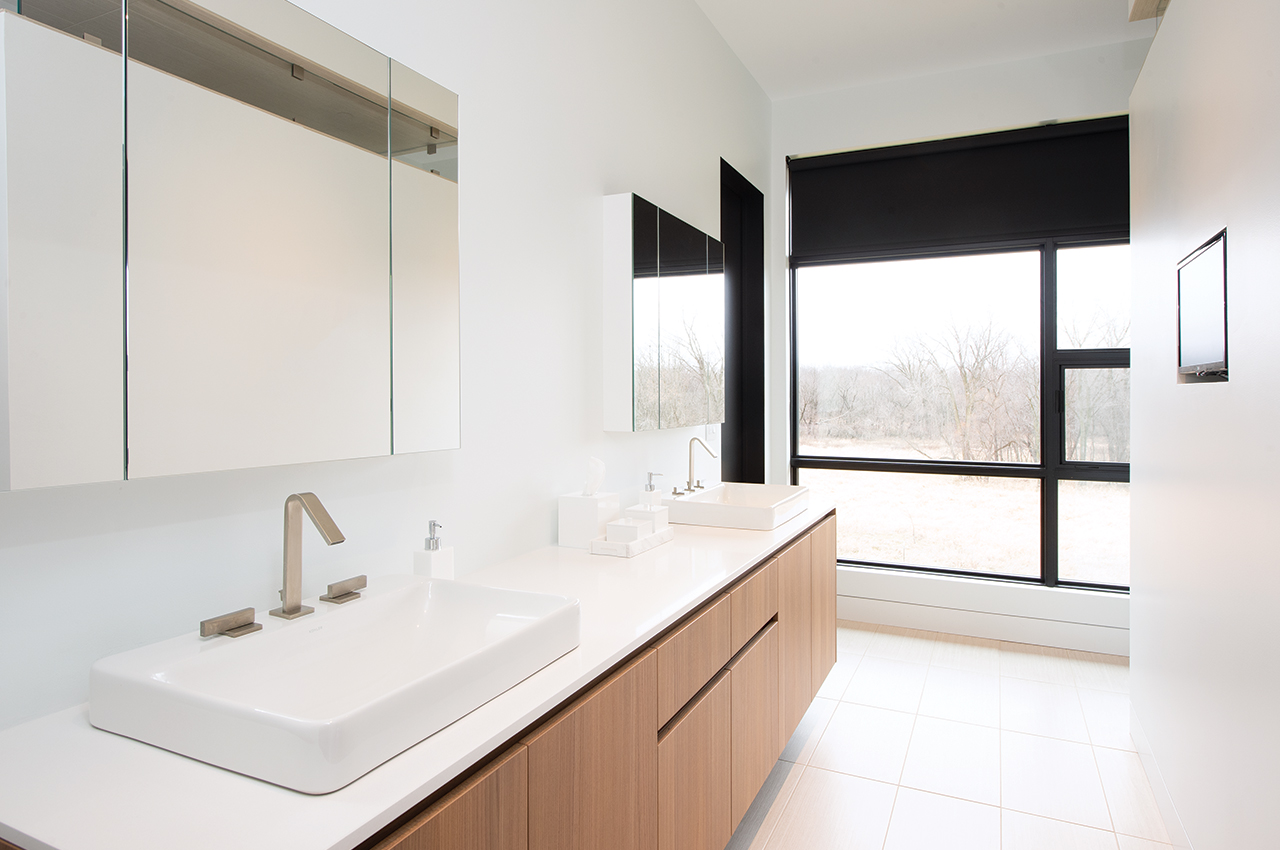 The master bathroom features the same elm, white quartz and sleek design as the kitchen. The mirrored medicine cabinets, by the Italian company Rifra, “look like they float,” Davis notes. 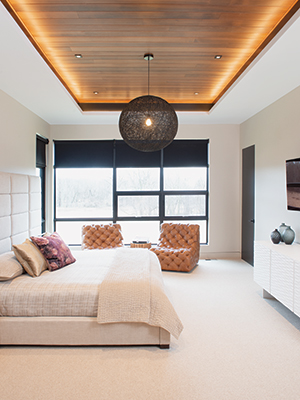 In the master bedroom, the recessed cedar ceiling is stained walnut to tie in with the wood tones in the living area. The wood also brings more intimacy to the room, which, as in the rest of the home, has 11-foot ceilings, Davis says. A “Random” black pendant by Moooi draws attention, while recessed LED rope lighting softens the look for evening.

The horizontal windows articulate a more geometric pattern common in prairie style. The frames are painted the same black as the exterior trim. 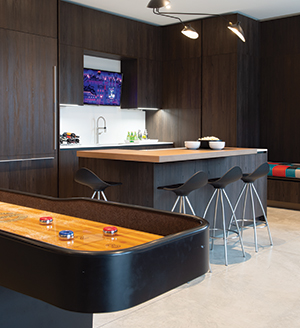 The basement features a full Poliform kitchen, with larch cabinetry stained tobacco. “The darker finish grounds the space and gives it warmth,” Davis says, noting that the floors are polished concrete. The floating piece of wood on the island is made of elm, which, Davis says, “ties back to the upstairs kitchen and creates interest.” Known for their wave-like form that mimics the curves of the human body, the Onda barstools offer comfort along with style. 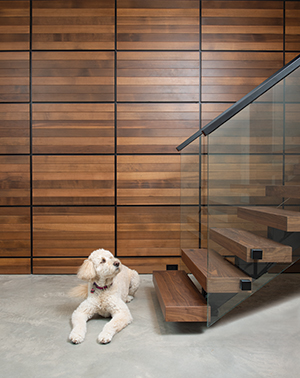 The homeowners’ goldendoodle, Maddy, keeps watch in front of the basement’s music room, which is hidden behind a cedar wall. 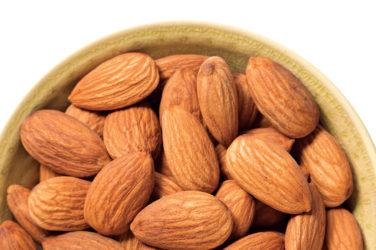 The right snacks can boost your health instead of sabotage it. 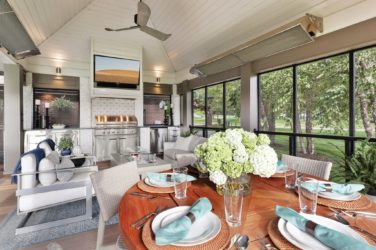 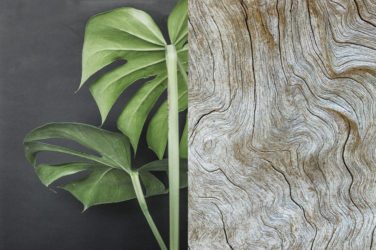