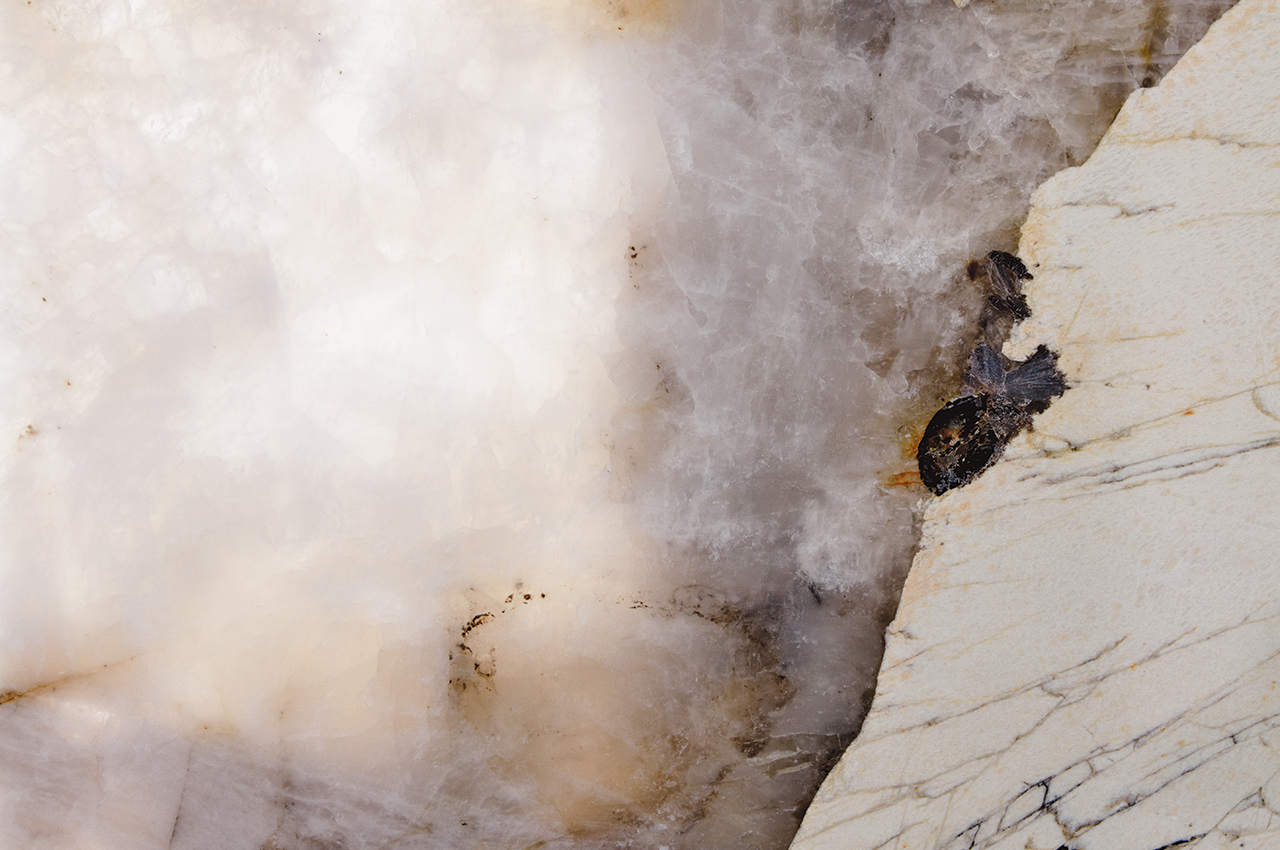 Above: A detail of the striking stretch of Patagonia granite that creates the waterfall surface of the kitchen’s island and backsplash.

The sun loosens its grip as shadows lengthen outside the floor-to-ceiling windows of Whitney and Alexander Hall’s home. Hidden in the shade outside, a doe rustles around a clutch of trees, rooting through the early spring shoots and fresh greens, while the chatter of birds bids adieu to the day. Inside, though, there’s a different kind of quiet. The couple’s toddler chatters to herself, a game of her own making serving as the background to the low crackle of the living room fire. From the kitchen, the soft sounds hint at dinner, the low gurgle of a pot on the stovetop coming to a boil.

That quiet, that respite—it’s what the Halls savor and it’s why they designed and built a retreat near Maffitt Reservoir. The Halls’ days running their burgeoning St. Kilda’s restaurant empire are full and frenetic; in just three years, they have put a stamp on Des Moines’ ever-changing dining scene. But here, inside this home of their own making, there’s little to distract and even more to contemplate.

The couple met in New York City—Alexander has had cafes there and in Australia, where he was born, and London, where he was raised, while Whitney, a Des Moines native, worked in the fashion and beauty industries. “Our dream was to come here and open a cafe and build our dream home,” Whitney says.

They had already established a relationship with Brent Buck Architects in Brooklyn, New York. Their quest for a building site began even before the couple moved to Des Moines—Whitney’s parents were charged with scouting property.

The lot the Halls eventually chose had one thing in particular of note: “It’s set up on a hill,” Whitney says. “It meant that when we designed the house, we would never have anyone build in front of us, and there was a nice walking path through the neighborhood.”

As they tackled designing and building the home, the couple divided duties, with Alex in charge of the back and forth between the architect and contractor Oakwood Builders Group, and Whitney focusing on the interiors, fixtures and fittings. Whitney pulled inspiration for everything—interiors, landscaping and the overall feel.

“We had a lot of things to show Brent as far as what we wanted, and we were very similar in mind,” she says. “Brent brought a lot to the table with his experience and with how he integrates his aesthetics into his designs.”

The Halls wanted light and openness, with thoughtfulness in every detail and decision. The care and craft in the process shows. As Whitney concludes, “We took a lot of time in making sure every element was done in the best way possible.” 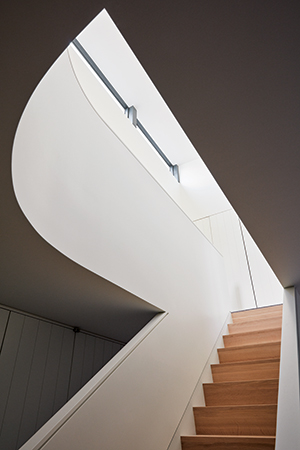 The curve inside the entry mimics a curve on the exterior of Whitney and Alexander Hall’s home on a wooded hillside near Maffitt Reservoir. Architect Brent Buck “wanted to juxtapose the blockiness of the exterior against the detail as you come inside the house,” says Whitney. Stairs on both sides of the house lead to the partially finished basement. 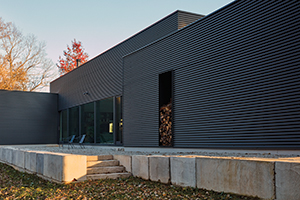 Corrugated metal walls eliminate exterior upkeep concerns for the Halls. “We really liked how this modern and industrial choice ended up fitting in the landscape,” Whitney says. At first the couple wanted a pitched roof, but they moved to a flat one instead; it hides cup-like structures that direct water flow. A retaining wall of oversized bricks helps to delineate home from landscape. 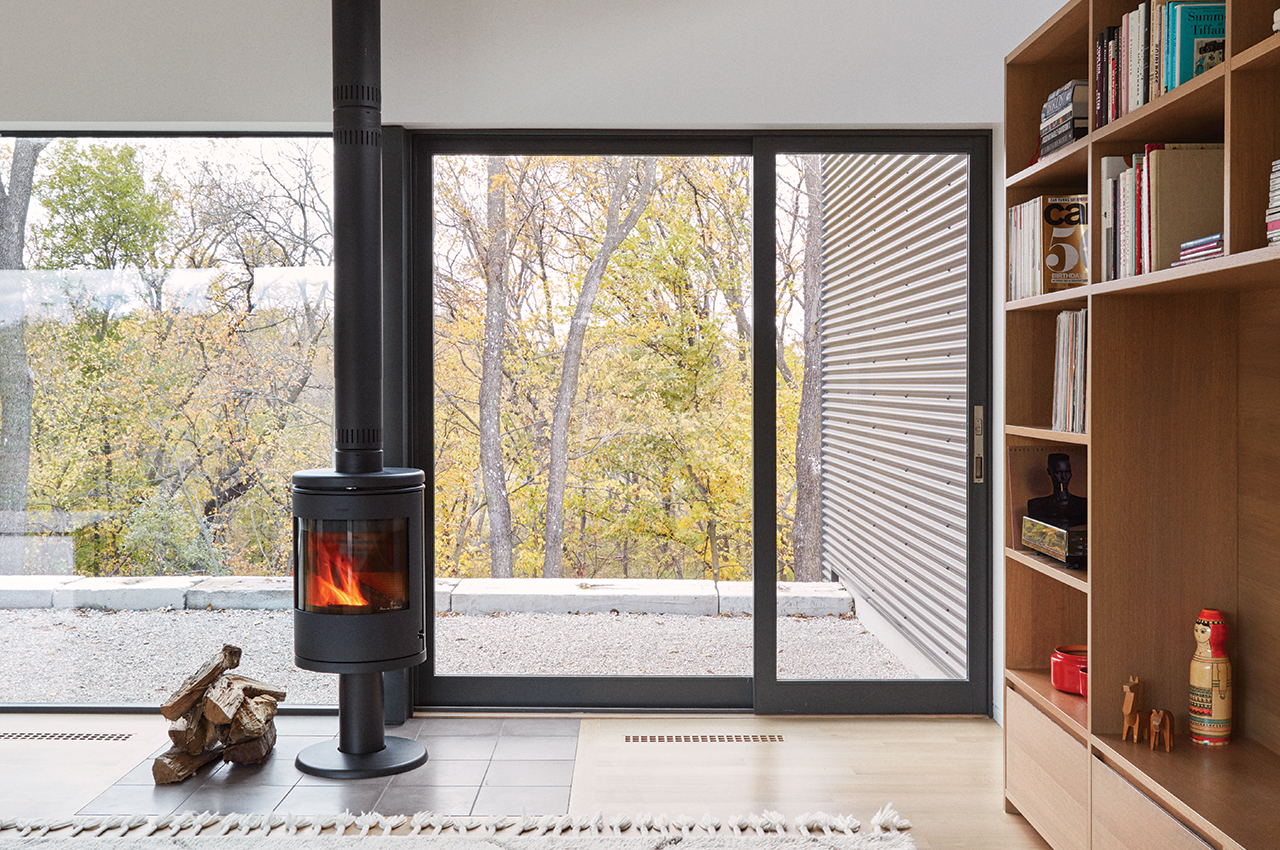 In the living area, a Morso wood-burning fireplace offers both design and functionality; it’s a Danish brand that’s been in existence since 1853. Barnum Floors installed the white oak floors, which are burnished by a Bona finish and topped with a rug from West Elm.

The Halls dug deep into every element in the home, thinking about fluidity and integrating details. There are no blinds or shades on the expansive windows and doors, for example. “Nothing affects the light as the sun moves around the house,” Whitney says. 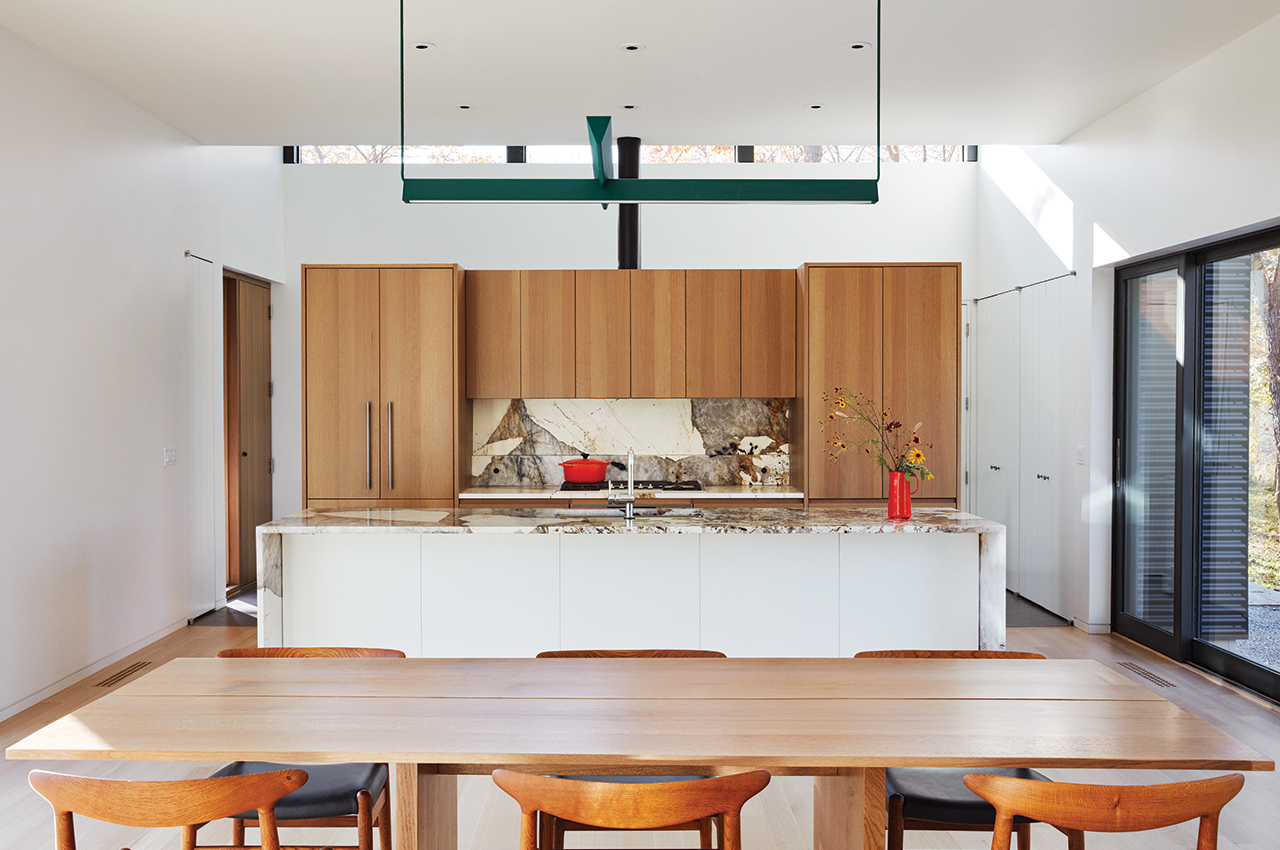 The collection in the dining room includes a custom table, designed by the couple’s architect and built by Andy Boyce of the Wooden Kitchen in New Virginia, Iowa; antique Hans Wegner chairs; and lighting from Montreal-based Lambert and Fils. The clean lines that distinguish the home continue in the kitchen with the custom-made cabinetry and an integrated refrigerator from Fisher and Paykel. Behind the white doors are a pantry, coat closet and powder room.

Whitney’s favorite space is the open living area: “I can be cooking and my daughter is right there playing—we’re living in it as a family, not as separate entities in the house.” The Halls and their architect depended on craftspeople to execute their thoroughly planned details, such as vents integrated into the wood floor. “The house is so comfortable no matter the season,” she says. “There’s a sense of peace and calmness when we go home.” 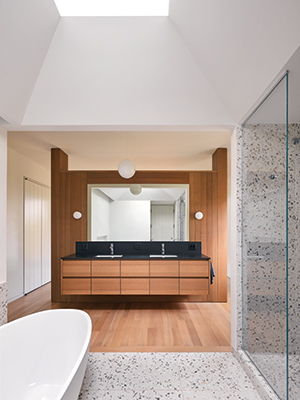 Skylights in the master bathroom let in plenty of sunlight throughout the day. The Halls used a custom terrazzo mix (detail, below) in the bathroom, a textural counterbalance to the dramatic but refined use of wood throughout. The Victoria and Albert bathtub echoes the home’s overall sleek sophistication. 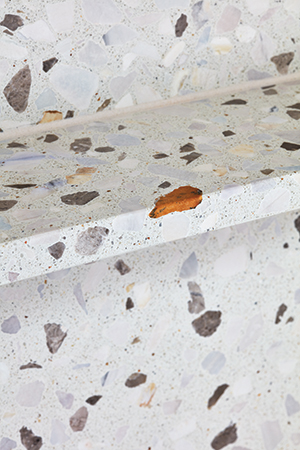 The house responds to the modern needs of the family, with built-in storage, for example, in everything from the master shower to the kitchen and entry.

“In the interior, we chose things that were comfortable,” says Whitney, “but it still has to be lived in, so we chose elements that were modern but thoughtful.” 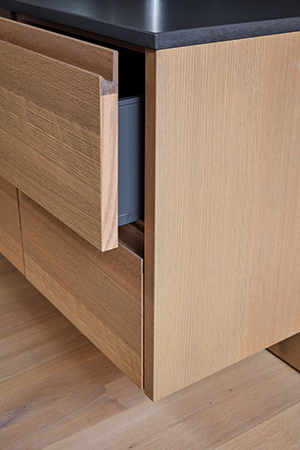 The white-oak millwork was custom-made, a reflection of the couple’s commitment to invest in the details. “It wasn’t so much about creating rooms, but about creating the finish,” Whitney says. Start to finish, the design and build process took about two years.

A Recovery of Its Own 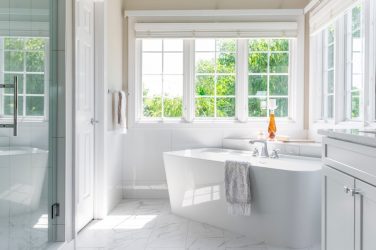 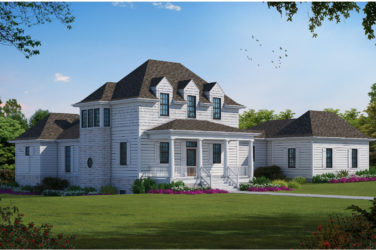 One of the homes featured in the Home Show Expo has a farmhouse vibe, ... 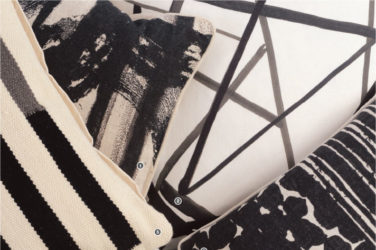