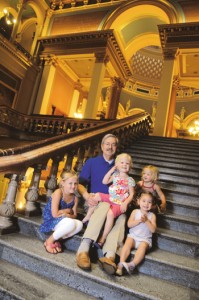 Sleeping over at your grandparents’ house is an extra special treat when it means spending the night at Terrace Hill. Such is the case for Gov. Terry Branstad’s four granddaughters: Mackenzie, 6, Bridget, 3, and Alexis, 2, daughters of Eric and Adrianne Branstad; and Sofia, 2, daughter of Allison and Jerry Costa, who are expecting their second child this winter.

“They love to come and explore at Terrace Hill,” Branstad says. “There’s a (stuffed) moose and an elk and a caribou, and a swing set. It’s kind of a unique place to explore.”

Wednesdays are a standing date with their grandma, Chris, whom they love to help garden the raised beds on the property. But Mackenzie also is interested in shadowing her grandpa, perhaps already harboring gubernatorial ambitions of her own.

“She was just 4 when I ran for governor,” Branstad says. “She used to say ‘Grandpa and I are running for governor.’ She was in one of my commercials and even walked in the State Fair parade.”

To return the favor, Branstad has stopped into Mackenzie’s class on several occasions, including once to perform the “Happy Dance” with Jeriann Ritter, a meteorologist with WHO-TV.

“Grandparents have a special bond with grandchildren,” Branstad says. “They always love to see you. They’re so uninhibited.” 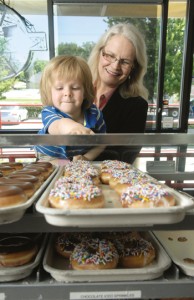 The birth of an oldest daughter’s first child is an adrenaline-pumping mix of emotions. Factor in a tornado warning and a maternity ward evacuation and the experience vaults to an entirely new level.

Jumping into her role as can-do grandma, Cyndi Pederson took the situation in stride. She donned scrubs to tote the camera into grandson Jackson’s delivery room for proud parents Libby and Joe Crimmings.

“The experience will always be one of those treasured moments in my life,“ despite the added pressure of filling in behind the lens for her professional photographer son-in-law, says Pederson, deputy executive director of Salisbury House & Gardens and a previous director of the Iowa Department of Cultural Affairs.

Pederson’s approach to grandparenting is similar to the one she took as a mother and to the philosophy she adopts as a mentor for young professionals. In the most stressful and special moments, it’s about offering trust and confidence but then stepping back and letting them discover on their own.

Pederson and Jackson, now 3, have been close since he was born. They live just a few blocks from each other, and Pederson regularly picks him up at his preschool. Its close proximity to Krispy Kreme means Pederson is learning how to balance the grandmother’s instinct to indulge her handsome little passenger with one that instructs. Instead of going each day after school, the treat is reserved for Thursdays. The duo count down on a little dry cleaner calendar together, looking forward to sharing a sweet “Doughnut Day” snack. 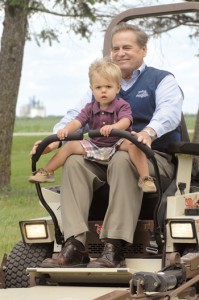 Gary Palmer treasures the lawnmower moments, when the sunlight slants across the grass and his grandson nods asleep in his lap.

“My fun in life is being with my family,” says Palmer, president and CEO of Prairie Meadows Racetrack and Casino. “I enjoy every second of it. It’s time well spent.”

As grandfather to Sophia, Madi and Palmer, he savors the simple rituals he shares with each of the three toddlers—when they let him catch his breath.

“I’m definitely a softy,” says Palmer, “Anything they want with me, they get.”

Palmer and his wife, Ginger, had their first child eight years into their marriage, and Palmer says family life has consumed and delighted him ever since. Whether it’s taking big vacations together in St. Lucia or chasing little Palmer through the halls at Prairie Meadows, Palmer’s grandchildren give him energy and a chance to re-experience some of the favorite times he had when his daughters were young.

Sophia and Madi, daughters of Wendy and Bill Murphy, are growing up Drake Bulldog fans in Chicago. Two-year-old Palmer lives in Altoona with his parents, Amanda and Kyle Mertz. An almost daily visitor to see his grandpa at work, he’s already earning a reputation at the racetrack.

“Everyone who sees him knows who his grandfather is,” Palmer says of his grandson. “He’s a little me—there’s no question about that one. The way he acts, the way he looks. At Prairie Meadows, everyone in the place knows him. He’s a real smoothie.” 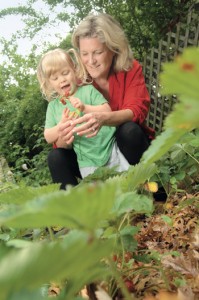 Bringing up three daughters was so much fun, Sarah Grant says she couldn’t wait for a third generation to add even more enjoyment to her busy life. When Polly, daughter of Rachel and Zachary Eubank, entered the scene, the artist and owner of Sticks Inc. became “Grandma Sugar.” Grant’s girls grew up with involved grandparents, and she wanted to lend the same support.

“I’m still working hard, but when I make priorities, they’re first over extracurriculars,” she says. “It’s about making time and not excuses.”

Grant’s lucky enough to live in the same neighborhood as the Eubanks, which means 3-year-old Polly is a regular visitor who helps in the garden and paints in the studio, and who makes a beeline to the freezer to feed fistfuls of frozen peas to the dog on each visit.

“Polly has the personality of my girls,” Grant says. “Outgoing, theatrical, adventurous. Of course I think she’s the smartest, most precious, talented girl on the planet.”

Polly has even seen the little girl ghost that haunts Grant’s 1904 Owl’s Head home–if you believe in that sort of thing.

“She went up the big staircase to her playroom and stopped,” Grant says. The little girl she described—a “pink girl”—matched the profile of the friendly specter other family members have encountered.

Sixth sense or not, Grant says her daughters, three stepsons and all of their spouses make for a fun, full house, but it’s little Polly who brings everyone together as a family.

Embrace Your Wild Side

Written by Wini Moranville Photos by Duane Tinkey In the early 1980s, I worked ...