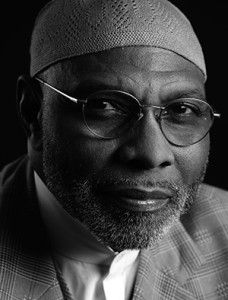 Editor’s note: This story was originally published in 2016. Some facts and numbers were updated in 2020.

By Ako Abdul-Samad as told to Tim Paluch

Longtime community activist Ako Abdul-Samad, 68, is a state representative, a past member of the Des Moines School Board and the CEO of Creative Visions, a community service agency he founded in 1996. Abdul-Samad has lived through intense personal and cultural turmoil that has steeled his character, broadened his vision and focused his resolve. He reflects on his life here, in a conversation condensed by dsm contributing writer Tim Paluch.

I grew up here in Des Moines. I left in the late ’60s and then returned in the middle of the ’70s.

The Panther headquarters here was blown up. Six of us were in the home at the time. From that point on, the commitment was made. There was no turning back. I felt if we were doing enough to challenge society in Des Moines, Iowa, that they felt they had to kill you, then I was headed in the  right direction.

We started some other things. We did a free breakfast program, and we fed about 300 kids each morning before the schools had a breakfast program. It was always that children were our future. We were the future. We were the new leadership coming up. And it was really funny, because none of us looked at living long—especially after you’ve been blown up and after you’ve been beat up a few times by the police. We just felt it was a matter of time.

I looked at my mother and sister and I decided to leave and get out of here, and I ended up in West Memphis, Arkansas.

I worked at a couple of jobs and ended up on a riverboat, the Delta Queen. One of the things I learned at a young age was I let life open the door and then I tried to enter it. I never wanted to get to the point where life was living me.

I visited a lot of places because of the boat, up and down the Mississippi from Minnesota to Natchez, Mississippi, to Baton Rouge, Louisiana. You know, New Orleans I really enjoyed. But I also felt that if I was going to do the work, I would do it here.

I reconnected with Islam and became a Muslim. I had wanted some fulfillment. In fact, at one point I even dressed in the garb, until I realized the garb didn’t make you Muslim. You have to be who you are. You have to get in the lane you’re in if you’re going to succeed in life. And be comfortable in that lane.

My son was part of an organization called the Black Gangster Disciples. A year before his death (1997), we were sitting at my home on Christmas. I was on the floor, he was on the couch, and he looked at me and said, “Pops, I’m not gonna live to see my next birthday.” He was 18.

On December 8 of the next year, he called me, and said, “Pops, I want to come work with you. I’m coming out of the street.” So we decided to meet two days later and fill out the paperwork.

On December 10, I’m out front waiting for him to come down the street. I’m sitting in the van because it’s cold. And a car drives up and says, “You need to get to the hospital.”

So they take me through this door and they say, “We need to sit you down.” And I say, “No, take me to my son.” It was one of the longest walks I’ve ever taken in my life. And when I got through the two metal doors, there I saw little Ako lying on the gurney. And I walked over, and he had a hole in his chest. And I kissed him on the forehead. This was December 10. His birthday was December 14. I talked to him and told him, “Your prediction was true.”

I end up taking Rodney (the shooter, who insisted the death was accidental) into my home. We had a press conference, and I forgave him, and I took him into my home.

I didn’t want him to get killed. His mother called me and told me, “You’re the only one who could save my son’s life,” because people wanted to kill him (as retaliation).

And he stayed with me during the two weeks I prepared for my son’s funeral until we could get him to safety.

It was a hard two weeks. There were nights I wanted to break him up in the basement. But I had to fight those demons. And it was a fight; it really was. I had to define me. What’s my reason for living? Why am I here? And if I didn’t forgive him, how would I look at myself in the mirror, if I’m telling people to forgive and telling people to reach deep inside? They asked me if I wanted to file charges, because he did have a gun. They said he said it was an accident. I was so tired of losing folks. Because when you have a situation like this, you lose one to the grave and one to the penitentiary. And I didn’t want to do that. I’ve done more eulogies and counseled more families than I ever wanted to.

The night of the (2003 school board) election, I was out knocking on doors. There was snow outside. They call me and tell me I gotta come to the Holiday Inn.

Everybody was in the room. My mother was there, and she said, “Your grandfather always said, ‘When you run for office you prepare two speeches: one if you win, one if you don’t. But whatever you do, you keep your head up. Don’t get negative.’ ”

I finally end up getting myself into a corner and I pray. I say, “God, just give me strength.”

I’m looking at my mother, and tears are coming down. And she grabs me and gives me this great big hug and everyone is in shock. And my mother looks at me and says, “Which pocket is your speech in?” And I said, “Mom, I only prepared one.” If I had lost, I didn’t know what I would have said.

(My time on the Des Moines School Board) wasn’t positive. It was really disappointing. I was hoodwinked and bamboozled, like most new politicians.

I think it prepared me for what was to come ahead, and that was to deal with introspection. I constantly had to ask and deal with “why.” And I came across a quote from Mark Twain that I even use today: “There are two important days in your life–the day you are born and the day you find out why.”

I had to look at what I wanted to accomplish with that little dash in the middle. From the day I was born, that in-between, to the day I die. I needed to know why. That was my journey.

I couldn’t just keep saying I was a community activist. I had to go within myself and find my commitment—how deep was my commitment to the community?

Mom died of cancer three years ago. She died in my arms.

When I asked her one of the things that she wanted, she said she wanted to sit on a beach and look at the ocean. Now, my mother was scared to death of big bodies of water. The most water she would get in was the tub. And I felt so bad I could not fulfill that dream with my mother.

So one of the things I will do, and I hope to do it this spring, God willing, is I’m gonna take root beer—she loved to drink root beer—and I’m gonna go somewhere on a beach and I’m gonna sit down and drink two bottles of root beer for my mother and me.

I don’t have a family and I’m not married, but I hope to do that one day. I tell everybody every year that, July 25, I’m going to get married. And they say, to whom? and I say I’m going to find her this year. And July 25 is going to be the date, because that’s my birthday …

When they found the tumor (in 2011), it was as large as a golf ball, growing right behind my forehead. It had just reached a point where I couldn’t function. There were weekends when I would have to stay in bed.

I’m at home, alone, planning my funeral. Just you and the funeral director. And he looks at you and says, “What kind of casket do you like?” And he opens up the book and you’re picking out the casket you’re gonna lay in if you don’t come off that table.

At that moment, the sadness that came across me was that I didn’t have a wife and children. That’s the thing that hit me so hard, that I could not leave my deck, walk through the kitchen, walk into my living room and sit with my family.

(Abdul-Samad made a full recovery.)

Aim for Real, Not Cosmetic, Change

I met with the president of Iowa State University, Steven Leath. We had an in-depth conversation about college. I said, “How do we get individuals interested in going to college?” He looked at me and said, “Do you have any ideas?”

I said, “Yes, if Iowa State would adopt King Elementary and Moulton Elementary, let’s break the chain of hopelessness.” It’s now called 4U Promise. That gives you hope. And that’s not cosmetic; that’s systemic. Because at the end of that 12th grade, when they graduate, they now have their tuition paid to go to Iowa State University.

If it weren’t for where I’m at now, I probably wouldn’t be sitting with these individuals to even plant that seed.

And that’s what keeps me going.

Over the past decade, Greater Des Moines has become a place where young professionals ...

Meet three Des Moines women who are bringing vision and creativity to the city’s ...