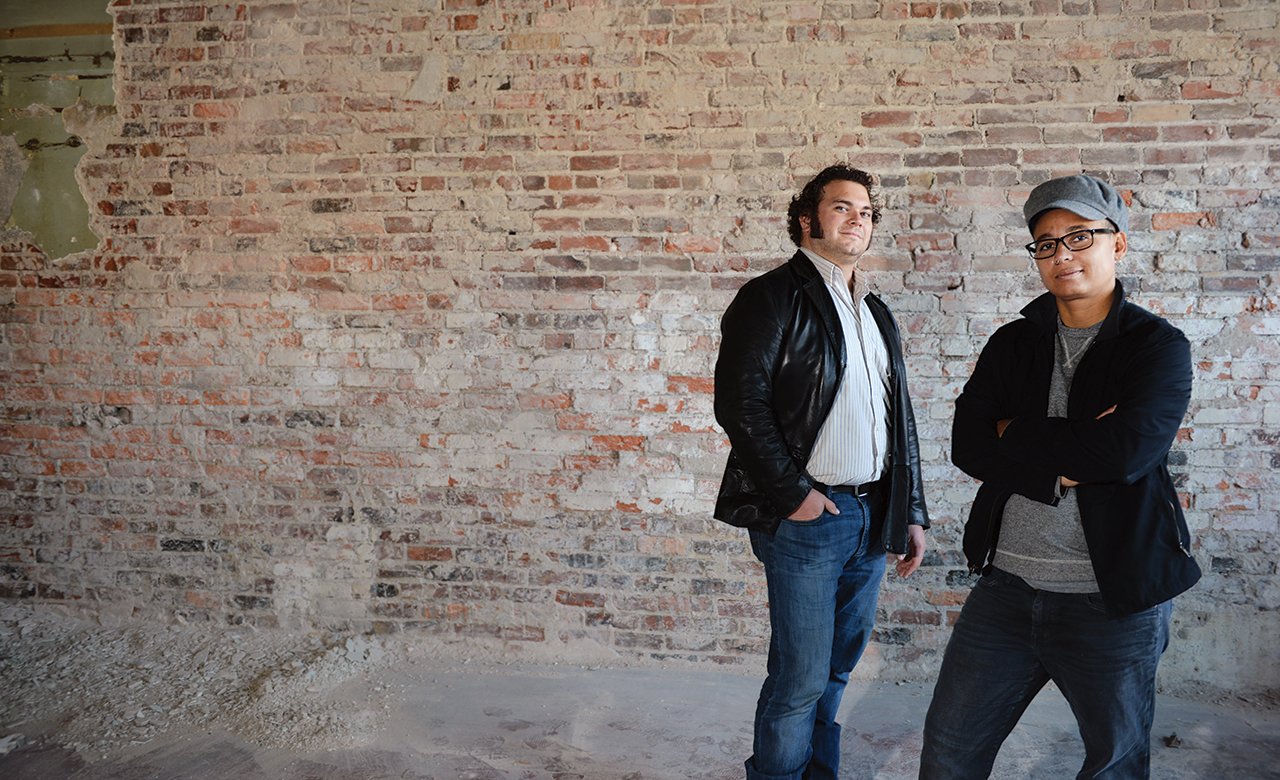 Above: Thom Kutz and Tobi Parks shift their gaze briefly to the dsm camera, but their vision is generally focused on the future, transforming this old building and the way local musicians can be trained and marketed.

Standing on 24th Street near Drake University, you might find it hard to look at the bland building at No. 1159 and see it as the future of the local music scene. But give it a couple of months, and that’s exactly what Tobi Parks and Thom Kutz hope it will be.

The space is under renovation, but by mid-May, Parks and Kutz hope to have it transformed into xBK: a 3,000-square-foot, 250-person performance hall that will serve as a sort of musical and artistic laboratory for Des Moines’ creatives. It will also double as the home of Station 1 Records.

Station 1 was founded by Parks in April 2015. Three years prior, Parks and her wife, Janée Harvey, had started looking for a way to move their two kids out of New York City, where Parks worked in the music industry.

“We wanted a place where one of us had family,” Parks says of the move, “and at the time, the criteria also had to include a place where we could still be legally married. That kind of meant Des Moines by default.”

Harvey had family from Iowa, but Parks had nothing but desolate mental images of the Midwest to guide her. She admits that her biggest fear was that the city would lack any kind of creative community. That led her to reach out to groups like the Des Moines Music Coalition and the
Des Moines Social Club, which put her in touch with Christopher Ford, Brandon Clark, Zachary Mannheimer and others engaged in some of the city’s most visible artistic endeavors.

Helping Artists Develop
“I thought it would be really cool to do a nonprofit label,” she recalls, “something that isn’t so much about the end goal, and more about helping artists develop.

“But,” she adds, “I think people were pretty skeptical of this person nobody knew coming into town and starting a record label.”

Assuaging those fears was what made those early artist connections so valuable. “I’ve worked with Tobi in a number of capacities,” says Brandon Clark, a musician as well as a copyright lawyer with McKee, Voorhees & Sease. “She’s extremely hardworking, fearless and selfless. She’s a great facilitator and her knowledge is essential for Station 1 and its artists.”

Despite being unknown, Parks had the background to earn supporters. Now 42, the St. Louis native is a veteran of several bands that garnered strong local and regional followings. Moving to New York in 2006, she became an associate director and director at Sony Music Entertainment, working with acts tied to the Columbia and Epic Records labels. In short, Parks came to Des Moines armed with an eye for talent and the knowledge to help it flourish. That, in her mind, is Station 1’s true aim.

“Labels today don’t want to spend as much time developing and growing talent,” she says. “They would much rather focus on signing complete products and expanding them.”

That leaves indie artists out in the wilderness when it comes to figuring out how to develop and promote themselves. For Iowa artists, that’s where Station 1 comes in. Parks helps them develop their business acumen, promote themselves as a brand as well as an artist, and sharpen their presence on YouTube, Facebook and other social media.

One Epic Meeting
It’s a wide-ranging vision that required more than just one person to implement. Enter Thom Kutz.

The 32-year-old Wisconsin native moved to Des Moines in 2012 to attend Drake University. He was working as an attorney in West Des Moines when he first heard about Parks and her idea for a new record label. After being introduced by a mutual friend, Kutz and Parks sat down in early 2016 for what was to be a half-hour meeting. Three and a half hours later, Kutz returned to his office.

“I realized right then that I wasn’t going to be working for a law firm for much longer,” he says with a laugh.

A month later, he was Station 1’s second employee.

Working with their clients, Parks focuses primarily on what artists need to do to develop their sound and break out to a larger audience, while Kutz concentrates on the business side of being a professional musician. He walks the artists through creating business plans and teaches them the ins and outs of contracts.

The intimate nature of any endeavor run by two people means their duties will often overlap and bleed into one another; Kutz and Parks work well together, they say, because their abilities are complementary.

“When I first started making music, it was my dad and I pulling a little red wagon around Des Moines trying to figure everything out,” says Station 1 artist Lily DeTaeye. “Signing on with Thom and Tobi changed the whole game for me. Now I have more time to focus on my music. I have two people I really trust to ask business questions, and I have a team that is focused and willing to do whatever they can to help my career.

“They also come from DIY backgrounds, so we share a work ethic,” she adds. “Station 1 has quickly grown into my family and I couldn’t be more happy about it.”

A strong following on YouTube alone isn’t enough to push a talented indie artist forward. Live performances are essential. And while most artists with a sliver of ambition and a working phone can book themselves a bar gig, getting in front of audiences outside of their hometown can be more daunting. So Kutz and Parks help book their artists in cities and towns outside of their natural comfort zones.

Summer in the City
The two also see the enterprise as something more than just a record label: From the beginning, Parks sought to make Station 1 a good community partner. To that end, Station 1 last summer launched its Summer in the City concert series.

“So much stuff is happening downtown, and I understand that the city spent a lot of money to get people to do things down there,” Parks says. “But now all of these other, outlying communities are being overlooked.”

Parks and Kutz identified four spaces in neighborhoods that they thought were underutilized and good fits for artistic programs: Good Park, Stewart Square Park, Martin Luther King Park and the Greenwood Park amphitheater. For each space, the pair met with neighborhood commissions, partnered with local volunteers and brought a touring act to town.

“We didn’t just want to put on concerts in these places,” Parks says. “We also wanted to use them to expose our artists to these bands, and get them acquainted with one another. So we paired each act with a Station 1 artist and another band from the local area.”

“It was a lot of fun,” says community organizer Seth Anderson. “These shows were among the most inclusive and diverse in terms of both the audience and the volunteers and staff that I have ever seen in the city.

“The reception was very positive in all the neighborhoods,” he adds. “One of the challenges a concept like this faces when it’s brand new is getting people to recognize that this really is a show for them. So there was a lot of passing out flyers and going door to door, actually taking to people in the neighborhood to help get the word out.”

For 2019, Parks and Kutz have their sights set even higher. In addition to bringing back the Summer in the City series, in October 2018 they announced the signing of a sixth artist—EleanorGrace—to the label, to go alongside Lily DeTaeye, Maids, Sires, Andre Davis and Motide. Then there’s xBK.

An Entertainment Incubator
Originally planned for an opening in 2018, xBK has been slowed by zoning issues, cost overruns and the long-delayed sale of Parks’ former home back in Brooklyn.

Now that everything is moving forward, however, Parks and Kutz hope to have xBK (the name is a call back to Parks’ status as a former resident of Brooklyn, often abbreviated there as BK: ex-BK) up and running by mid-May.

“Everything in the space has a utilitarian use behind it,” Kutz says. “It might look like art and be nice, but I assure you it’s there for a utilitarian reason.”

Kutz says he doesn’t regret leaving the law firm to start working from his living room and Parks’ home, which currently serves as Station 1’s de facto home as well, a bustling center of activity filled with musicians, Drake University interns and people who just want to be involved. Station 1 has already attained a level of success that Parks readily admits couldn’t have happened without Kutz’s efforts, and neither of them can imagine going forward without the other.

“Whatever happens,” Parks says, “whether we’re successful in our goals or not, I’ve found my business
soul mate.”

With a smile, Kutz agrees: “This is the healthiest working relationship I’ve ever been in.” 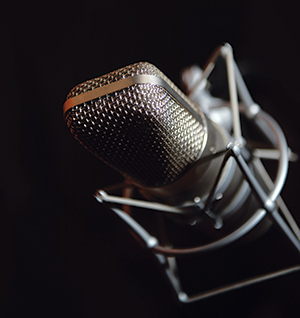 Sires: This three-piece power pop group plays the sounds of the ’50s ’60s and ’70s in a high-energy fashion. Founded in 2012 in Waterloo, the group consists of Dylan Sires (vocals/guitar), Ross Klemz (drums) and Graham Howland (bass). They released their debut album, “Soul for Sale,” in 2016.

Lily DeTaeye: An indie folk rock and pop artist, Lily DeTaeye released her debut EP in 2017. The singer/songwriter is based in Des Moines.

Maids: The disco/electronic duo of Mickey Davis and Danny Heggen released their debut EP, “These Days,” in 2016. Their music is described as “a blend of nostalgic, beat-driven synth pop and indie-dance tracks.”

Andre Davis: Andre Davis is a spoken-word artist who lives in Des Moines. The St. Louis native signed with Station 1 in 2017.

MoTide: Gabe Scheid and Jeremy Franklin form this two-piece electronic experimental group. Inspired by pop, hip-hop and jazz, they seek to “push the boundaries of music, art and technology … to create soundscapes that are meditative and transcendent.” 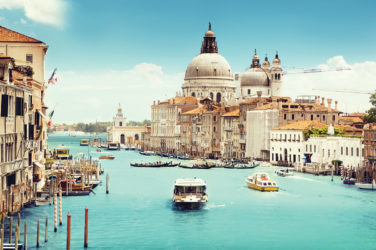 Des Moines art scholars have a second home amid campos and canals. 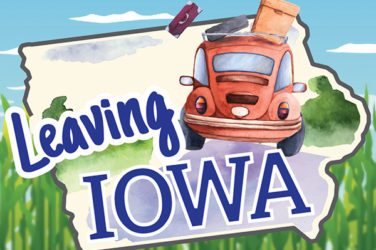 “Leaving Iowa” will kick off the Playhouse’s winter and spring season on Feb. 19. ...