When the middle-aged Iraqi man and his wife arrived in Des Moines from Iraq in 2016, they felt they would be better able than most to navigate their new home: A cousin already had immigrated to Central Iowa and had secured the man a job and assistance with a place to live.

Eager to put down roots in Des Moines, the couple (who requested anonymity for this article) wanted to learn English and become citizens. They were surprised to find, though, that despite the man’s job and their support system, they didn’t know where to turn to obtain most of the services they needed.

“We needed to find [English] classes and the right bank; we needed to go to the doctor,” the man says. “I thought there would be directions for us, but we just had to keep asking people, ‘How do you find this or do this?’”

The couple’s experience is all too common, says Nick Wuertz, director of refugee and immigrant services for Lutheran Services in Iowa. That’s why despite a delay caused in large part by COVID-19, LSI expects plans will begin moving forward by the end of this year for a new Greater Des Moines Welcoming and Empowerment Center to assist foreign-born local residents.

The project stems from a 2016 report released by the Greater Des Moines Partnership and the Partnership for a New American Economy. The report highlighted recommendations to ensure that foreign-born individuals could access the resources and support necessary to reach their goals in Des Moines.

Polk County, the city of Des Moines and the Greater Des Moines Partnership agreed to back the center, and a selection committee last year chose LSI to operate it. LSI will collaborate with those groups and others to finalize plans for the center, including financing and location, by next year, Wuertz says.

“Although everything has been delayed a bit, it’s safe to say enthusiasm for this project hasn’t diminished in the least,” he says. “At its core, this project is about making Central Iowa a more welcoming community for all.”

Organizers envision the center as a hub of resources for anyone who moves to Des Moines from another country, a “one-stop shop for anything that tends to trip people up when they’re trying to figure out how to make a life here,” Wuertz says, such as language, transportation, financial management, child care and job training. Available resources would support integration into the community and promote a long-term ability to thrive.

“Right now, you could have an immigrant studying English one night a week in a church basement, seeking legal services in a neighborhood center on a Saturday morning, and going to someone’s house for tutoring [on taking] the citizenship test,” Wuertz notes. “With the center, all this would be under one roof; the services would come to them.”

Those involved with the project also would like the center to include a large gathering space for events. “One thing that is really important to everyone involved is that this is seen as a true community center, a proud piece of Iowa’s legacy,” Wuertz says. “We want to create something that meets the needs of the populations but also says something about who we are and what we value.”

The center would be funded through a capital campaign, the details of which are in the early stages.

“We’re in the process of talking to a variety of people and sharing the vision,” Wuertz says. “We also need to understand how different organizations that serve these populations see themselves as being part of the project as well as being part of the physical space.” Those groups include the Iowa Bureau of Refugee Services, Iowa Workforce Development, Catholic Charities and others, he says.

Sanjita Pradhan, program director of talent development for the Greater Des Moines Partnership, says the proposed center has been a need for many years. She recalls having felt, as an immigrant from Nepal in 2006, the same “incredible frustrations” that often are part of today’s immigrant experience.

While the center will serve all immigrants, “I have special concerns for the skilled professionals who …  can’t find the resources they need to work and earn to their potential in their new home,” Pradhan says. For example, someone who was an engineer or an architect in his or her country of origin may not understand how licensing is different here, and “that lack of understanding can lead that person to give up and become underemployed.”

That scenario is a negative one for the local economy as well as for the individual, she says.

“If that person were making what he or she should be making, we’d be getting the tax return as a community,” Pradhan says.

“To attract and retain a global workforce, we need to start with being organized when people arrive, and with being welcoming,” she adds. “We have the people and processes in place for both those things. We just need to centralize them. That’s … a large part of what this center will be designed to do. Many, many people will be happy to see this happen.” 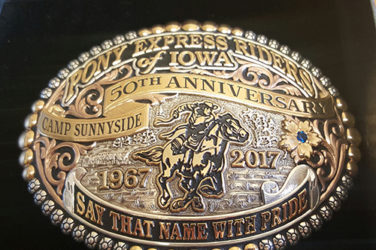 This is the 50th anniversary of the Pony Express Riders of Iowa. Many riders ...